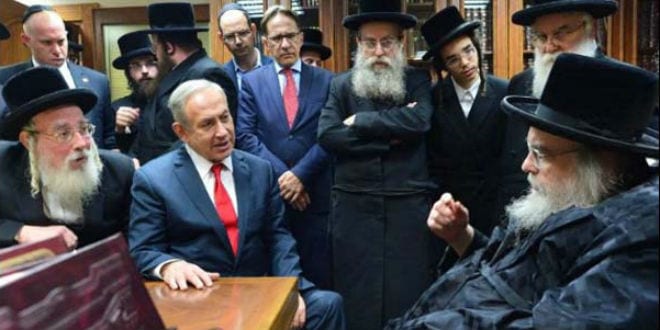 Prime Minister Benjamin Netanyahu on Sunday night attended the last day of the Shiva (mourning) week for the late mother of the Belzer Rebbe (Rabbi), Rabbi Yissachar Dov Rokeach, in Jerusalem, B’Hadrei Haredim reported. Netanyahu, who was accompanied by MK Israel Eichler (UTJ), who is a Belzer Chassid, thanked the Rebbe for the support he has been receiving from the MK, to which the Rebbe responded, saying, “I told Rabbi Eichler that it’s been years since we last had a prime minister who knew how to stand up to the world like you.” He added, “It’s all in the hands of Heaven.”

The PM told the Rebbe that “we had a big miracle that we’re over a difficult time in the US. Now a new president has been elected and we should pray that he will be good for the Jews and for Israel.”

Responding to a question from the Rebbe, Netanyahu described in some detail the great danger Israel faced from Iran, and his tough mission of going to the American Congress to warn the entire world about the Iranian menace, a menace not only to Israel but to the whole planet.

“Everyone was against it, including friends who warned me against appearing before the Congress,” Netanyahu told the Rebbe, “but we succeeded in convincing the whole world there was danger. It wasn’t easy, but we did the maximum,” the PM said, noting that he got two-thirds of the Congress to support him, which “I can’t get in our country.”

Netanyahu told the Rebbe he and his family study the weekly Torah portion every week, saying it’s what gives him strength in facing difficulties and challenges. “Without faith I couldn’t face the whole world,” Netanyahu said.

The Rebbe blessed the PM to succeed in leading the country upon calm waters, that there won’t be a split in the nation, and that none would be able to harm them.