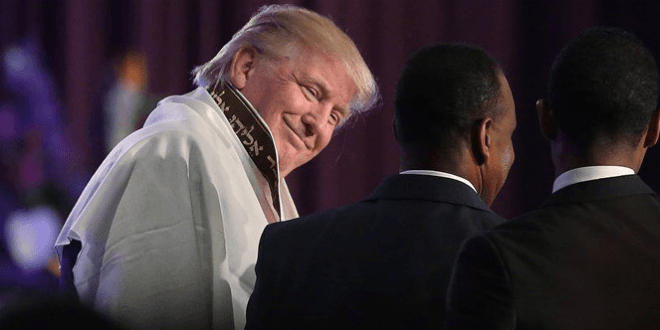 Donald Trump’s inauguration on Friday will not only be a momentous occasion, it will also be visibly religious, with six members of the clergy ushering in the new president. Underlying it all will be an unprecedented presidential connection to Israel and Judaism.

Trump’s campaign was strongly connected to Judaism, with his Jewish daughter and son-in-law, Jared and Ivanka Kushner, constantly by his side. His inauguration will be even more so. Rabbi Marvin Hier, the dean and founder of the Simon Wiesenthal Center and its Museum of Tolerance, is slated to give a benediction after Trump’s inaugural address. It will be the first time since Ronald Reagan’s second term in office in 1985 that a rabbi has offered a prayer at a presidential inauguration.

Though Rabbi Hier is a long-time friend of Jared Kushner’s parents, Trump’s choice in rabbi’s is also an indirect jab at the man he is replacing in the Oval Office. In its list of the top ten anti-Semitic/anti-Israel incidents of 2016 released two weeks ago, Rabbi Hier’s organization posted President Barack Obama’s decision not to veto the United Nations Security Council resolution 2334 as number one.

But the Jewish connection doesn’t end there. Of the six faith leaders present at the inauguration, five of them have strong ties to Judaism or Israel. Bishop Wayne Jackson of Great Faith Ministries International, who will give a benediction at the ceremony, made headlines last September when he draped a tallit (Jewish prayer shawl) over Trump’s shoulders during a campaign visit to Bishop Jackson’s Detroit church.

In addition to prayer shawls, Jackson’s ministry has adopted many Jewish customs as part of their worship, including observing the Jewish holidays and Sabbath on Saturday. Bishop Jackson is reported to have a personal Torah scroll in his home.

Also participating is evangelist Paula White-Cain. White-Cain, who is close to Trump, is reported to fast on Yom Kippur and perform other Jewish rituals, though she has encountered some criticism for perceived misappropriation of those rituals. When she had herself wrapped in a Torah scroll during a ceremony, many Jewish groups spoke out in protest.

Trump will also receive blessings from major evangelical figures Rev. Franklin Graham and Rev. Dr. Samuel Rodriguez. Rev. Graham, of the Billy Graham Evangelistic Association, is an outspoken and strong supporter of Israel. He criticized Obama’s failure to veto the anti-Israel UN resolution, saying, “Israel is America’s closest ally in the Middle East and the only true democracy in that region of the world… For the U.S. not to stand with Israel is shameful.”

Rev. Rodriguez is another strong pro-Israel figure. He serves on the board of directors for the National Association of Evangelicals and the National Hispanic Christian Leadership Conference, the world’s largest Hispanic Christian organization. In 2015, Rev. Rodriguez’s organization launched launched an initiative called the Hispanic Israel Leadership Coalition (HILC) to support Israel.

The current Archbishop of New York, His Eminence Timothy Michael Cardinal Dolan, will also speak at the inauguration.