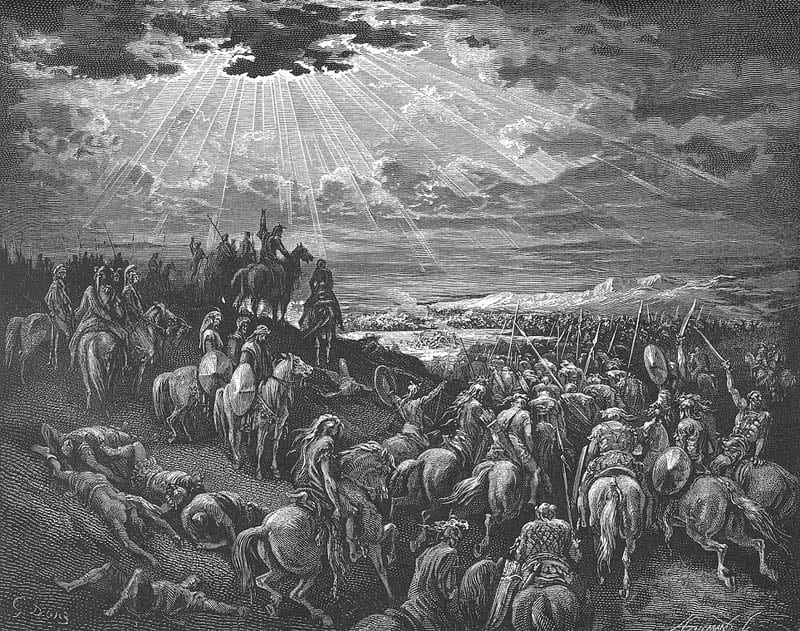 Three researchers from Ben Gurion University believe they have discovered the scientific explanation behind the miraculous Biblical account of the sun standing still for Joshua during battle. Though their solution may not be miraculous, their approach is a symbiotic marriage of science and the Bible.

Dr. Hezi Yitzchak, Dr. Daniel Weistaub, and Dr. Uzi Avneer, of Ben Gurion University in Israel’s Negev, released the results of their study last week in Beit Mikra, a Hebrew language journal for the study of the Bible. In the study, they suggest that the miracle of the sun standing still when Joshua fought five armies in order to help the Gibeonites was actually attributable to natural causes – namely, a solar eclipse.

In chapter ten of the Book of Joshua, the Israelites go to war against five kings in order to help the Gibeonites, with whom they had signed a pact. While Israel was prevailing in the battle, God sent down stones from heaven to smite the enemy. Joshua prayed for the sun to stand still in order to have time to complete the victory. God answered his prayer.

And the sun stood still, and the moon stayed, until the nation had avenged themselves of their enemies. Is not this written in the book of Jashar? And the sun stayed in the midst of heaven, and hasted not to go down about a whole day. Joshua 10:13

Using data from NASA tracking astronomical events, the team of scientists ascertained that the only solar eclipse which occurred during the period when the Jews are believed to have entered Israel was on October 30, 1207 BCE. Though the Bible mentions other cases of the sun standing still, the story in the Book of Joshua is unique in that it also mentions the role the moon plays in the process. This led the scientists to conclude that the Bible was relating a case of a solar eclipse, in which the moon comes between the earth and the sun.

One glaring difficulty for the scientists’ theory is that the Bible describes the sun lingering in the sky for an extended period of time. Their explanation, a solar eclipse, is precisely the opposite: the sun disappearing at a time it normally appears in the sky. The scientists resolve this contradiction using Hebrew etymology.

The description of the event in the Book of Joshua uses the word דֹּם (dom), usually understood as ‘stand still’. The word is only used in one other place in the Bible.

Resign (דּוֹם) thyself unto Hashem, and wait patiently for Him… Psalms 37:7

The scientists concluded that the word דֹּם (dom) actually means ‘to become dark’.

Though this explanation may seem unlikely at first glance, the report cited several classical Jewish sources which state the event described in the Book of Joshua was actually a solar eclipse.

Most notably, it quotes Rabbi Moses ben Maimon, commonly known as Maimonides, a prominent 12th century Spanish Torah authority. In his book, The Guide to the Perplexed, the Rambam understood the case in Joshua to be a visible phenomenon rather than an extension of time, based on the verse stating that it was done in a visible manner.

Then spoke Yehoshua to Hashem in the day when Hashem delivered up the Amorites before Bnei Yisrael; and he said in the sight of Israel… Joshua 10:12

The Rambam reasoned that this was a case of the rays of the sun standing still, or being stopped, as in a solar eclipse.

Rabbi Avraham Arieh Trugman, director of Ohr Chadash:New Horizons in Jewish Experience, accepted the results of the study with equanimity. Rabbi Trugman cited a fable attributed to Rabbi Yisroel ben Eliezer, known as the Baal Shem Tov (Master of the good name), who founded the influential Hassidic movement in the 18th century.

The story tells of a scientist who approached the Baal Shem Tov, saying he could explain the Red Sea splitting when the Jews came out of Egypt by attributing it to an exceptionally high flood tide. The scientist described all of the astronomic conditions necessary to create such a tide, stating that although it was indeed rare, it was entirely reasonable to expect such an occurrence.

The Baal Shem Tov was said to have responded by exclaiming, “What a miracle! A miracle! At the very moment that Israel needed to cross the Red Sea, there was this unique conjunction of stars.”

Rabbi Trugman explained his understanding of the story to Breaking Israel News.

“Despite the fact that in many different areas people want to pit science against Torah, what is much closer to the truth is that in most cases there is no conflict between science and Torah,” said Rabbi Trugman. “It is very common to find many areas in which there exists an amazing confluence of  secular knowledge and Torah wisdom.”

Though some may disagree with the study’s methods and some of their conclusions, the scientists’ conclusion that the Bible can be an accurate sourcebook for history will find favor with the Biblically-minded.

“Not everyone likes the idea of using physics to prove things from the Bible, and I know that it may be interpreted as if you are rationalizing your faith,” Dr. Yitzhak told Haaretz on Sunday. “We do not claim that everything written in the Bible is true or took place… but there is also a grain of historical truth that has archaeological evidence behind it.”

The scientists also located what they believe is the location of the battle and the 18-mile path the Hebrew soldiers trekked overnight in order to launch a surprise attack in the morning. They concluded that it was actually the region between the city of Jericho and Gilgal, a type of gathering site mentioned in the Bible in several places.

The article in Beit Mikra did not address the “great stones” and “hailstones” the Bible describes as being responsible for killing more of the enemy than died in the actual battle.