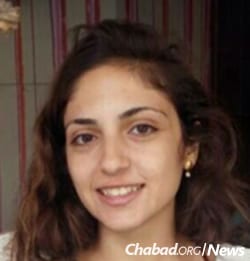 For the Colel Chabad family, Hajaj’s murder placed additional heartbreak on the orphan she tutored. “Not only was Shir an honor student and in active service in the Israeli army, she also volunteered to tutor orphans for Colel Chabad,” explained Rabbi Sholom Duchman, Director of Colel Chabad, to Breaking Israel News.

“One of her students was a teenager whose father passed away from an illness three years ago. Her last tutoring session was with this child on Saturday night, just hours before she would leave her home and her family for the very last time.”

Hajaj tutored physics and math. Her last tutoring session with the 16-year-old high school student was in physics to prepare her for Israel’s challenging matriculation exam. The now devastated student reportedly told her mother on Saturday night just how much she appreciated having Hajaj as a teacher.

Hajaj was the eldest of four daughters. Her uncle told Army Radio, “She was our flower, simply a magnificent girl. She was always the pride of the family.” She was also described as modest and with a quiet smile from which people could tell with one glance that she was good and filled with love.

Hajaj’s funeral was attended by hundreds of fellow soldiers from her Military Intelligence unit, friends, family and those who wanted to honor her. It was held the day after the terrorist attack at the Military Cemetery at Har Herzl in Jerusalem.

Leah Babayof, coordinator for Colel Chabad in Maale Adumim, said that she had spoken with Hajaj several times over the course of her volunteering for the organization. “This was a young woman who truly wanted to help her student and one was immediately impressed by her maturity and true desire to help others,” she said.

“Perhaps, were it not for this tragedy, the world would never have gotten to know about Shir’s dedication and remarkable caring for others,” noted Rabbi Duchman. “But she is a true example of what it means to be humbly performing charitable acts and we can only hope that this remarkable lesson will offer some comfort to her family and friends during this tragic time.”

Colel Chabad has set up a special fund in Shir Hajaj’s memory. Donations will go towards helping and educating orphans. Donations to the fund may be given here.