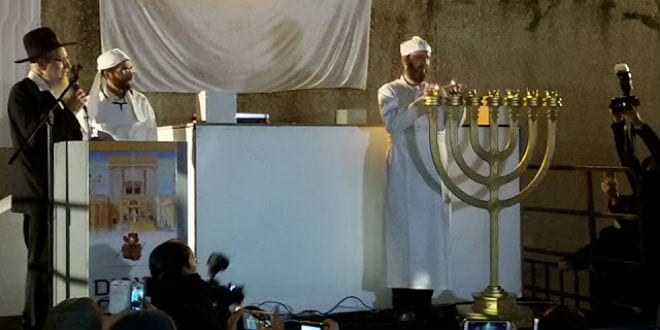 Hundreds of people gathered in the Old City of Jerusalem on Thursday evening to participate in a special menorah lighting ceremony and  for the Hanukkah holiday, organized by the Temple Institute and the United Temple Movement

The menorah, made of wood covered in gold and standing at about four feet tall, has seven branches, modeled after the Menorah that stood in the two Jewish Temples as well as the Tabernacle. The oil used to light the menorah was prepared one month ago in the manner specified by the Torah, with special care used to maintain its ritual purity.

The menorah was whisked away to be lit several more times in sites that were as close to the Temple Mount as Jews are permitted to go, rekindling the light the Maccabees first lit 2,000 years ago after their victory over the Greek army.

2016 marks the first year that this impressive menorah, used in previous Temple reenactments, was lit in ceremonies during the Hanukkah holiday. Rabbi Hillel Weiss, spokesman for the nascent Sanhedrin, explained the urgency that led to this year’s unprecedented spate of menorah lightings surrounding the Temple Mount.

“On the eve of Hanukkah, President Barack Obama, via the United Nations, declared that the Jews have no Biblical right to Israel. Just three months ago, UNESCO tried to erase any connection between the Jews and their holiest site on the Temple Mount,” said Rabbi Weiss. “At the ceremony, we reenacted the blowing of the trumpets for Rosh Chodesh (new moon). This is the same trumpet blast that is the call to battle. This year, lighting the menorah was a part of the Jewish battle for their Biblical right to the land, in precisely the same way it was for the Maccabees 2,000 years ago.”

Since it is made of wood, the replica is technically not kosher for use as the menorah in the Temple, which must be made entirely of metal. The gold menorah intended to be installed permanently in the Third Temple upon its construction is on display in the Jewish quarter of Jerusalem. Made to Biblical specifications, it is not portable and cannot be used for reenactments. Standing approximately six feet tall, it weighs half a ton, and contains 45 kilograms (approximately 99 lbs) of 24 karat gold valued at approximately three million dollars.

Rabbi Yisrael Ariel hosted the evening and explained every step of the reenactment to those gathered. The reenactment ceremony included setting up a model of the altar and lighting the menorah in the manner specified in the Torah. In addition, exercises in preparation for performing the daily sacrifice, the additional sacrifice brought on in honor of the new moon, and sacrifices brought by the heads of the tribes were performed. Only photos of the animals were used and none were harmed in the reenactment.

The Kohanim (priests) wore garments adhering to Biblical specifications and silver trumpets, prepared for use in the Holy Temple were accompanied the proceedings. Before the sacrifice exercise, the Kohanim carried out the ritual lottery to determine which of them would merit to perform each function.

Immediately after the initial ceremony, which took place in the Cardo, the menorah was rushed to the Mount of Olives, where it was lit at a site overlooking and adjacent to the Temple Mount.

Joshua Wander, coordinator for the Mount of Olives menorah lighting, explained the reason for the additional ceremony.

“We have to reassert our Biblical right to the Temple Mount or we will lose it,” Wander emphasized. “Until now, the Israeli government has been unwilling to do so, but sometimes, current events are God’s way of pushing us to a place we wouldn’t go by choice.”