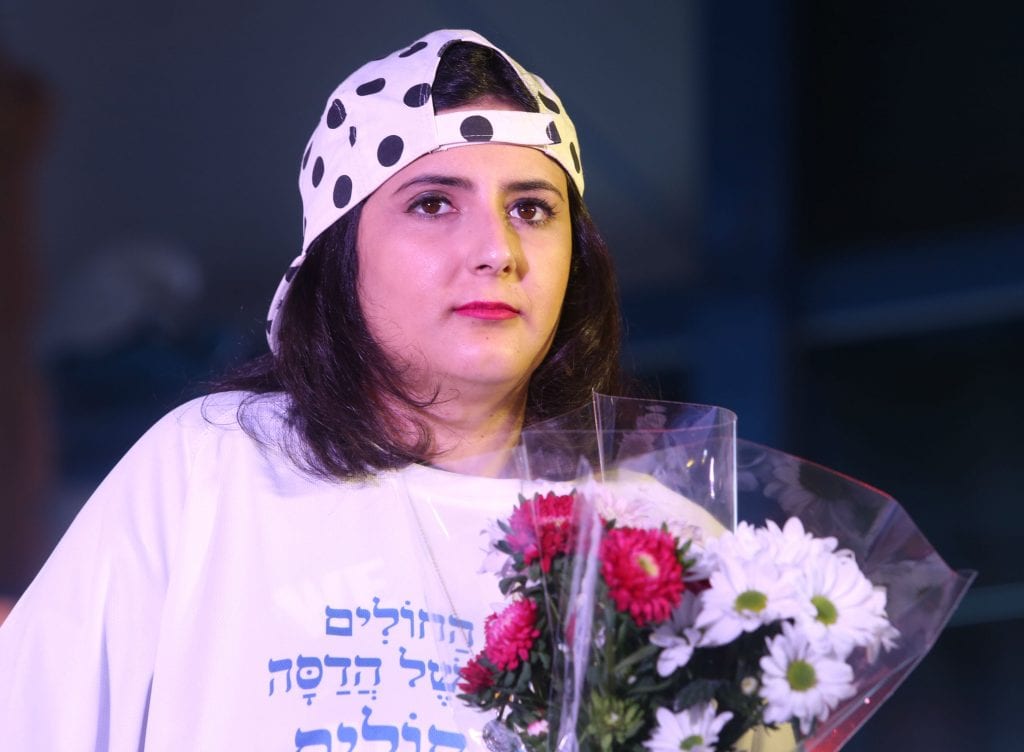 In nearly every way, 16-year-old Eden Levi is a typical Israeli teenager: With a polka dot baseball cap turned backwards, she says she enjoys everything that her classmates do: Music, movies, friends, talking about boys. In conversation, there is a shyness about her, but one that seems to mask a deeper sense of confidence.

But even from afar, it is clear that at least in a physical sense, Levi faces some challenges that set her apart from other teens, thanks to a suicide bomber that blew himself up last April 18 on Jerusalem’s number 12 bus: After sustaining life-threatening burns to 45 percent of her body in the attack, Levi arrived at Hadassah University Hospital – Ein Karem in critical condition and spent the next three weeks in a medically-induced coma, attached to a respirator.

Eight months later, the physical aftermath of the attack is apparent: Levi leans heavily on a crutch, and walks with a limp. At close range, the dermatology socks that help regulate her blood pressure as the layers of skin continue their recovery process become visible.

But on stage at Jerusalem’s Cinema City complex to light the fourth candle of Hanukkah, Levi appeared very much like any other teenager: Nervous at standing up in front of a large crowd, excited at the same time, and most of all grateful to celebrate a holiday that her family were not sure she would live to see.

“It was scary getting up on stage – I’ve never really done anything like that before,” she told Tazpit Press Service (TPS) after the ceremony. “But I’m so grateful to have had the opportunity – this is a holiday of miracles, and the very fact that I’m alive is my own personal miracle. It gives me a special connection to the festival.”

Predictably, Levi’s recovery process has been painful and arduous – hours of physiotherapy, including aquatic exercises, swimming and a several-times-a-week sessions in a specially-designed rehab weight room, a tough weekly lineup for a girl who says she was “never one of those kids who was always running around and playing sports.”

Yet Levi also said the aftermath of the attempt to kill her has given her an appreciation for parts of her life that she had taken for granted prior to the attack.

“I’ve had so much love and support, from so many directions – my mom and my sister, of course, but also the hospital staff, family friends, and my friends. They have all spent so much time with me, helping me and just showing me how much they care about me. It’s weird to say this about surviving a terror attack, but I actually feel like I’m really lucky,” Levi said.

Rachel Dadon, Eden’s mother, seconded her daughter’s assessment, and added that Eden has not been able to return to school, both because she has to be careful of germs that could cause her burns to become infected and because her physiotherapy regime does not allow her to maintain a regular school schedule. Dadon said her daughter’s teachers have proven themselves worthy of praise with limitless understanding, care and commitment to Levi’s wellbeing.

But more than anything, Dadon – an Orthodox woman who wears a tightly-fitted hat and peppers her conversation with “thank God” and “If God wills it” – said that Hanukkah is the most appropriate holiday of the year for the family to celebrate her daughter’s ongoing recovery process.

“The main point of Hanukkah is miracles that God did for the Jewish people in Jerusalem. Isn’t that what He did for Eden? She was close to death. The doctors told us they would do what they could but not to get our hopes up,” Dadon said.

Although Dadon didn’t compare Eden’s experience to the Maccabees’ struggle against ancient Greeks who occupied Jerusalem, the comparison was an obvious one: A seemingly helpless person, thrown into battle against a far -stronger adversary who nevertheless emerges victorious.

“But I think the even more relevant message here, at least to me, is the inner strength that Eden has shown throughout eight nightmarish months. She’s right about all the support she’s gotten from school, from families in our community and more. But this as all brought out a fierce determination and love for life that just wasn’t going to be erased so easily. It isn’t part of her ‘normal’ personality to be a fighter, and I think she surprised a lot of people by fighting so hard to pull through – including Eden,” Dadon said.