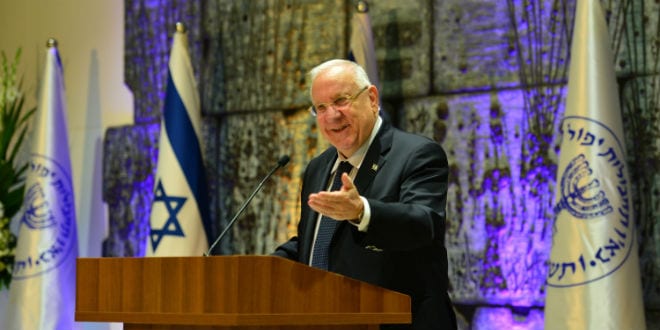 President Reuven Rivlin on Tuesday morning marked the civil New Year welcomed with the traditional annual reception for leaders of Christian communities in Israel, and wished all the Christian leaders and their congregations “a year of mutual understanding and respect. A year of justice and fairness.”

The reception, held in cooperation with Interior Minister Aryeh Deri, was attended by the Greek Patriarch Theophilos III, the Apostolic Administrator of the Latin Patriarchate of Jerusalem Archbishop Pierbattista Pizzaballa, and the Armenian Patriarch of Jerusalem Nourhan Manougian.

President Rivlin noted that “Looking back on the last year, there is a lot we should be proud of. We have continued to build good relations between the Jewish and Christian communities.” He added that “we may have different faiths, but we share many common values. We share a deep respect for mankind, created in God’s image. We share a commitment to love our neighbor. We share a hope for peace. And in this city, we all, the children of Abraham live together, side by side.”

“I see my role, and the role of the State of Israel, as guardians of this city,” the president continued. “As guardians, our sovereignty over Jerusalem will never compromise the freedom of worship and religion for all believers. United Jerusalem is the eternal capital of Israel and it will remain so. There is no international body with the power to revoke this. And as sovereigns of the city, I stand here today to repeat in the clearest way: the State of Israel is deeply committed to ensure the religious rights of all faith communities in Jerusalem and throughout Israel.”

The President stressed that “Israel is committed to finding a way to end the tragedy between us and the Palestinians. Time and again, we have held out our hand in peace, and called for direct negotiations, without pre-conditions, and without any delay. The decision to take Israel to the UN Security Council, was wrong in trying to force pre-conditions, but also in the way it was done. The international community’s most important job in helping us solve the conflict, is to build trust between the sides. How can we hope, as the Pope said, ‘write a new page’ in the history of Israel and the Palestinians, without this trust?” He said firmly, “The Security Council vote, was a blow to peace, and it was a blow to trust.”

Speaking on behalf of the Christian leaders, Greek Patriarch Theophilos III of Jerusalem said, “We take this opportunity of this holiday gatherings to express our gratitude for the firmness with which you defend the freedoms that lie at the heart of this democracy, especially the freedom of worship. We are always encouraged by your commitment to the sacredness of life and your condemnation of all forms of terrorism. These fundamental commitments are the basis of any society that understands that we share a common human destiny. The State of Israel takes pride in the fact that this state was founded on democratic principles in the Middle East, and that it guarantees full freedom of worship. We are confident Mr. President that you will continue to resist any restrictions of religious practices.”

He concluded, “We are keenly aware this season of the unspeakable experiences of those who suffer around the world, and especially those who suffer in the countries around us. So many are suffering for the mere fact of their religious allegiance, and as those who serve the moral values of our respective religious traditions we are deeply concerned.”

Minister Deri said, “Our ability to celebrate the festivals side by side, reminds us of the great extent to which we share common histories and future. The destruction of faiths has occurred in this land, and the State of Israel is the only secure state in this region where the Christian population lives and grows – not decreasing but increasing – all the while in other counties there is mass immigration and expulsion of the Christian community. Here the Christian community stands at 120,000 and its proportion to the general population continues to flourish.”

“The Government of Israel, and my office which is responsible for religious affairs, has been and remains committed to the strengthening and prosperity of the Christian community in Israel,” Deri added. “We are doing all in our to allow freedom of religion and worship to each according to their faith and outlook in their holy places. We are preserving and conserving the holy places as much as we are able. Last night I declared the launch of the strategic plan to strengthen the northern region, together with the Finance Minister, and in the presence of the Prime Minister. This is the region where 70% of the Christian community in Israel lives, and will directly benefit together with the other residents of the region from this initiative.”

Going into details, the minister explained that “the project funded by more than $5.2 billion will see investment transport infrastructure, and in the fields of health and education. In addition, in recent years, with the support of the President who pushed for the economic plan for the Arab regional authorities – where the Christian community also live – we have transferred $91 million in 2015-16, and in the framework of development grants we are transferring $208 million.”