Obama’s Christmas Gift to Israel: A Stab in the Back

Home » Obama’s Christmas Gift to Israel: A Stab in the Back 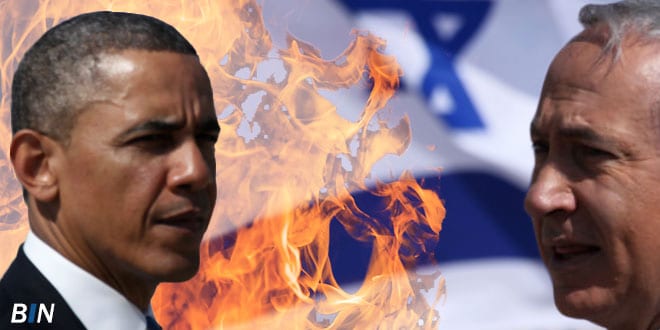 Eight years of steadily increasing animosity on the part of the Obama Administration towards Israel reached its peak on Friday when the United States abstained from voting in the United Nations Security Council’s (UNSC) latest anti-Israel resolution allowing the body to pass the draft.

Prime Minister Benjamin Netanyahu issued an irate message following the US’ betrayal of its most loyal Middle East ally. On Friday, the US chose to abstain at a critical anti-Israel vote at the UN Security Council, for the first time since the Carter Administration in 1980. The Council passed a resolution condemning Israel’s settlements enterprise in the liberated areas of Judea, Samaria and Jerusalem. The vote passed with the vote of 14 of the council’s 15 members, to the sound of great applause. A veto by the US – or any of the five permanent members of the council – would have killed the resolution.

Netanyahu’s message was unabashed: “Israel rejects the anti-Israel resolution at the UN and will not abide by its terms. At a time when the Security Council does nothing to stop the slaughter of half a million people in Syria, it disgracefully gangs up on the one true democracy in the Middle East, Israel, and calls the Western Wall ‘occupied territory.

“The Obama administration not only failed to protect Israel against this gang-up at the UN, it collaborated with the UN behind the scenes.”

“Israel looks forward to working with President-elect Trump and with all our friends in Congress, Republicans and Democrats alike, to negate the harmful effects of this absurd resolution.”

Indeed, the president-elect tweeted Friday evening: “As to the UN, things will be different after Jan. 20th.”

As to the U.N., things will be different after Jan. 20th.

Obama’s deputy national security adviser Ben Rhodes said Netanyahu had only himself to blame for being knifed in the back as he had been, for failing to heed repeated US warnings against his increased settlement activity. “Prime Minister Netanyahu had the opportunity to pursue policies that would have led to a different outcome today,” Rhodes said.

But The Hill’s Jordan Fabian noted that Rhodes couldn’t really explain how the betrayal at the UNSC would improve the situation in the Middle East. Instead, it appears Obama just used his last chance to smack Netanyahu right where it hurt, in a final show of force, once he was free of the need to restrain himself on account of the elections.

As Rhodes put it, quite shamelessly, “There is one president at a time, [and] President Obama is the president of the United States until Jan. 20 and we are taking this action, of course, as US policy.”

Netanyahu has begun to retaliate for the vote, ordering the Israeli ambassadors to New Zealand and Senegal for consultation. Israel does not have diplomatic ties with the two other states that called for a vote on the resolution – Venezuela and Malaysia. The PM also canceled a scheduled visit of the Senegal’s foreign minister to Israel in retribution for its vote as a temporary UNSC member, and voided Israel’s entire aid package to that country. He also canceled the visits of the non-resident ambassadors from Senegal and New Zealand.

On Friday afternoon, Israel’s UN envoy Danny Danon blasted the vote. With a Bible in his hands, Danon said the US betrayed Israel, saying in a statement: “It was to be expected that Israel’s greatest ally would act in accordance with the values that we share – and would have vetoed this disgraceful resolution”

Sen. Tom Cotton (R-AR) attacked President Obama, stating: “President Obama is personally responsible for this anti-Israel resolution. His diplomats secretly coordinated the vote, yet he doesn’t even have the courage of his own convictions to vote for it. This cowardly, disgraceful action cements President Obama’s richly deserved legacy as the most anti-Israel president in American history.”

The Republican Jewish Coalition released a statement saying that “by allowing the United Nations’ anti-Israel resolution to be adopted by the Security Council, in the face of fierce bi-partisan opposition, the actions of the Obama Administration will forever be remembered as a dark, shameful moment for our country. The resolution passed today will only serve as a greater barrier to peace, which can only truly be achieved through negotiations. Instead of pressuring the Palestinians to be a partner for peace, President Obama chose to break with long-standing diplomatic practices and allowed the one-sided, anti-Israel United Nations to be used as a tool to bludgeon Israel, our greatest ally in the Middle East.

“We applaud the efforts of Republican Senators, led by Senator Graham, to strip funding to the United Nations, which has time and again showed their anti-Israel bias. What happened today will forever be on the heads of the President, his Party, and groups like J Street that remained silent.”

This last part might not be such a smart move – some in Israel have pointed out that the last time the US cut its UNESCO funding it lost its influence on that vehemently anti-Semitic body, and remained unable to assist Israel when it is being attacked there. If anything, the Trump White House should enhance its involvement to be able to sway the support of the members in a desired direction.

Knesset opposition leader Isaac Herzog (Zionist Camp) condemned the UNSC vote and Netanyahu with the same breath, stating: “This is a difficult night for Israel. I strongly oppose this harsh resolution of the UN Security Council, which is a strategic defeat for Israel.”

The far-left was giddy. Meretz Chair MK Zehava Galon said she was happy the US did not veto the resolution “against the policy of annexation and settlement and not against Israel.” She pointed out the vote was “the direct result of the law to legalize settlements, with Israel having lost all its shame and the world having lost its patience.”

The party to the right of Netanyahu’s Likud was also pleased with the vote, recognizing a rare opportunity to use the unifying anger of the vast majority of Israelis to get some positive action going. Habayit Hayehudi Chairman MK Naftali Bennett said on Saturday night that now is the time to “switch from retreat to sovereignty.” Bennett added that “thousands of terrorists the world over are watching the UN resolution, seeing it as a call to arms. This resolution is the direct outcome of the policies of Oslo, of concessions, withdrawals and splitting – and the result of our public agreement to establish a Palestinian State at the heart of our country. [This resolution] must be discarded to the trash heap of history like all its predecessors.”

“This is the time for a U-turn,” Bennett said, “It’s time to switch from retreat to sovereignty. The conclusion is that we must stop marching on the suicidal track of a Palestinian State and to impose Israeli law on Ma’aleh Adumim, the Jordan Valley, Ofra and the entire Area C, as soon as possible.”

With additional reporting by Ariella Mendlowitz.