The Seeds of Messiah Planted in the Ruins of Amona

Home » The Seeds of Messiah Planted in the Ruins of Amona 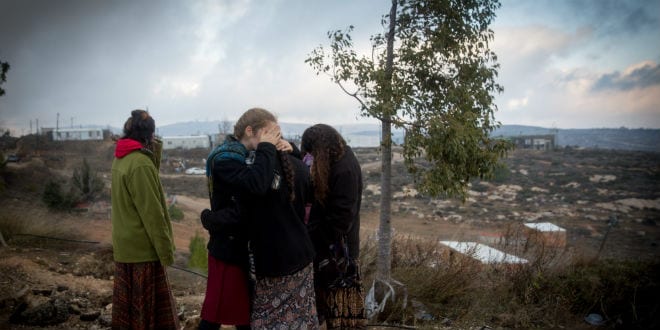 On Sunday, December 25th, when Jews and Christians around the world will be celebrating their respective holidays, the 42 families of Amona will watch as police and soldiers come pouring into their town to remove them from their homes. Ironically, some rabbis are seeing great, even Messianic beginnings in what appears at first glance to be an onslaught of unnecessary destruction.

Rabbi Shmuel Eliyahu, the Chief Rabbi of Tzfat (Safed), published an article in Israel National News on Thursday about the Amona episode, citing the admonishment by Rabbi Shimon Bar Yohai, a second century sage quoted throughout the Talmud, that the Land of Israel is only acquired through suffering.

“Our sages teach that one of the ten trials of Abraham entailed acquiring the Cave of Machpela (Cave of the Patriarchs),” wrote Rabbi Eliyahu. “Why was the transaction with Ephron considered a trial? Because Abraham had to pay an exorbitant price and beg the Hittites to sell him the cave, after G-d [Himself] had promised Abraham the entire land.”

“[Abraham] wasn’t interested in his honor or pride when appearing before the Hittites,” continued the rabbi. “We, too, must remind ourselves that our goal is settling the Land. It is a positive commandment whose value is worth the entire Torah, and if, for this, we must sign for the Supreme Court – we will do this too to fulfill the commandment.”

“It is difficult to understand and forbidden to state with certainty, but it is for this reason the Holocaust preceded the State of Israel,” Rabbi Berger said, quoting Rabbi Moshe Chaim Luzzatto, an 18th century Italian kabbalist known by the acronym Ramchal. “The Ramchal stated that rotting and descent are always necessary for growth. It is like a fruit that falls to the ground and rots before it puts out roots in order to create a tree.”

Rabbi Berger noted this is a trait of Israel, as written in the Torah.

Behold a people that riseth up as a lioness, and as a lion doth he lift himself up; he shall not lie down until he eat of the prey, and drink the blood of the slain. Numbers 23:24

Rabbi Berger stated that the destruction of Amona on the first day of Hanukkah was connected to the beginnings of Geula (redemption), citing “Bnei Yissaschar”, a kabbalistic book written by Rabbi Tzvi Elimelech of Dinov in the late 18th century.

“The hidden light of Messiah will begin to be revealed during Hanukkah,” Rabbi Berger divulged. “It is the light that comes from darkness, which is what we are seeing in the destruction of Amona.”

Rabbi Eliyahu concluded with a blessing for the families of Amona: “Lovers of the Land of Israel everywhere salute you with love, and pray that you will merit to settle the entire land on which Abraham our forefather established an altar and called out to G-d. Amen.”

The battle for Amona began twelve years ago, when Palestinians, aided by left-wing foreign funded NGO’s, petitioned the High Court claiming the community was built on Palestinian-owned land. Despite numerous appeals and delays, the final date to demolish the settlement was set for this coming Sunday.

Earlier this week, the families of Amona accepted an offer from the government in which they would voluntarily leave their homes in exchange for financial compensation and a guarantee that 24 families would be allowed to build new homes on a nearby plot of land. The rest of the families will be given plots to rebuild in the nearby city of Ofra.

Though this seems to have defused the situation, Israelis are watching events unfold, praying that this time will not be a reenactment of the violence that occurred in Amona ten years ago. In 2006, nine houses had been ordered destroyed by the Israeli high court. On the day of the evictions, 10,000 Israeli Police and IDF troops faced an estimated 4,000 protesters. By day’s end, the houses had been demolished but more than 300 people were injured, including about 80 security personnel.

Despite the signed agreement, tensions are still high as the government and settlers eye each other with caution and more than a bit of mistrust. The High Court is aware of this and on Wednesday night issued a demand that residents sign a declaration they will leave peacefully.

Israeli police are also preparing for the eviction. Channel 2 news reported on Saturday that prison authorities had emptied entire wings in preparation for mass arrests.

A confrontation between Israelis and their own soldiers would be painful for both sides. On Friday, Prime Minister Benjamin Netanyahu posted a video, calling on protesters “not to harm IDF soldiers and security forces under any circumstances. They are our sons, the apples of our eye, they are dear to all of us and keep all of us safe.There is no place for violence.”

The rabbi of Amona, Rabbi Yair Frank, released a statement on Saturday, asking protesters to refrain from harming security forces. “Our complete opposition to the destruction of the town of Amona must be expressed in a passive and nonviolent protest only. It is clear to us no one, in no situation, will raise a hand against the soldiers and policemen, who are our brothers,” he said.