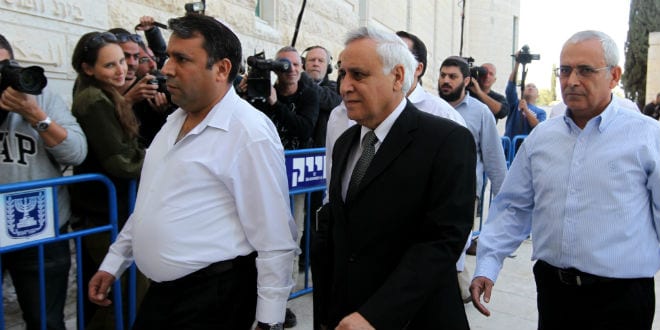 In a move which reflects the deeply Jewish values of even Israel’s most secular institutions, the Prison Parole Board has prescribed a daily dose of Bible study for Moshe Katsav, former president of Israel and convicted criminal, as one of the conditions for early parole from prison.

Katsav was convicted in 2010 of rape and sexual harassment and was sentenced to seven years behind bars. Initially, he was offered a plea bargain but later rejected the deal, claiming he would be vindicated in court. He also refused to take part in rehabilitation programs. Parole officials cited this and other statements he made as indications Katsav was unrepentant, leading them to reject his previous petitions for early release.

However, the Parole Board ruled on Sunday that Katsav will be released after serving only five years of his sentence. As part of his rehabilitation program, Katsav will be required to attend daily Torah lessons and attend weekly meetings of a religious treatment group.

The prison system, which incorporates Jewish study and values, had an effect on Katsav. At his request, the former statesman had been assigned a cell in the Torani (Torah) bloc, the section of the prison for religious Jewish prisoners. The Torani bloc has no access to television or newspapers. Prisoners are woken at 4:30 AM for morning prayers, pray three times a day, and spend most of the day studying Torah and other sacred Jewish texts.

After five years of this routine, Katsav has finally expressed regret for the first time in public. “I’m sure the women who filed complaints against me were hurt, and did go through what they said they went through,” Katsav wrote in a letter published by Channel 2 News on Sunday. “I have made mistakes and I must learn the lessons. I now recognize that I hurt them, and that I did not see the signs that they were hurt. I erred.”

It is not at all unusual that Torah and spirituality should play a role in a criminal’s process of rehabilitation, Rabbi Eliyahu Merav, who runs a high-school for young at-risk Ultra-Orthodox men, told Breaking Israel News. Not only that, but imprisonment can actually help people discover the benefits of religion.

“Prison takes away the most important thing a man has: his freedom,” the rabbi explained to Breaking Israel News. “It gives him humility in return. It opens his ears and allows him, if he recognizes this, the ability to change.

“A man can get to the point where he sees himself as a beast, an animal here in the world to eat and sleep, to get as much pleasure as he can,” Rabbi Merav continued. “As soon as he sees that there is a God, as soon as he is reminded of this, he knows there is a purpose to his life.”

Indeed, religious principles are used in many approaches to rehabilitation, and not exclusively in the Jewish faith. Implicit in the 12 steps program, one of the most widely-used methods to cope with addiction and behavioral problems, are some concepts basic to Christianity and Judaism, including recognizing a higher power, repentance, and forgiveness.

Donna Jollay, Israel365 consultant and pro-Israel Evangelical Christian activist, has personally experienced “the power of the Bible to heal and rehabilitate people.” Citing Deuteronomy, she noted that the power to make life-changing decisions has its source in the Bible.

I call heaven and earth to witness against you this day, that I have set before thee life and death, the blessing and the curse; therefore choose life, that thou mayest live, thou and thy seed. Deuteronomy 30:19

“This process, that comes directly from the Bible, helped me so very much to understand where I was choosing curses instead of blessings,” Jollay explained to Breaking Israel News.

Despite having a successful career, Jollay struggled with addiction for years, turning finally to the 12-step program.

“The steps are completely based on the Bible,” Jollay said. “I learned to surrender my own will and ways to His.  This journey led me to make Peace with Him that began with me having just a very small hope that God actually exists and loves me.”

Jollay cited another Biblical concept, this from Leviticus, as a prerequisite for personal transformation: forgiveness.

If they shall confess their iniquity, and the iniquity of their fathers, with their trespass which they trespassed against me, and that also they have walked contrary unto me. Leviticus 26:40

She explained how the process worked for her.

“I made peace with myself by simply confessing where I had fallen short, and receiving the forgiveness,” Jollay said. “I learned how to make peace with others by liberally extending forgiveness to them along with amends where I can and by allowing them and myself to be ‘human’ with all the shortcomings that come along with that.”