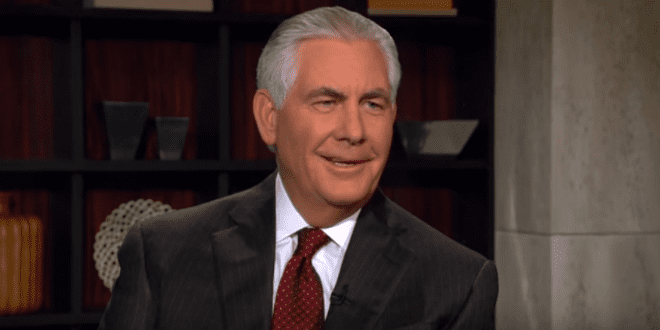 Pro-Israel organizations had mixed reactions to president-elect Donald Trump’s choice for secretary of state, ExxonMobil CEO Rex Tillerson, who has spent years forging deep ties with Sunni Arab Gulf states but has an unknown record when it comes to Israel.

“Mr. Tillerson has distinguished himself in the management of one of the world’s premier corporations. At the same time, we are unfamiliar with his larger geopolitical view of the world and America’s place in it,” the American Jewish Committee (AJC) said in a statement.

As CEO of one of the world’s largest oil firms, Tillerson naturally spent many years cultivating relationships with some of the world’s top oil producers, including Sunni Arab Gulf states such as Saudi Arabia, Yemen and Qatar. Tillerson was also involved in oil deals with the Kurds in northern Iraq, which inflamed hostilities with Iraq’s central government.

On Israel, which until recent years had not been a major player in the world energy market, Tillerson’s stances are relatively unknown. His lack of a clear history of working closely with the Jewish state contrasts sharply with Trump’s other rumored candidates for secretary of state, including former Massachusetts Governor Mitt Romney, former U.S. ambassador to the United Nations John Bolton and former New York City Mayor Rudy Guiliani. Bolton is now reportedly Trump’s likely choice for deputy secretary of state.

“Both before and during his Senate confirmation process, we will be particularly interested in his perspectives on a number of key issues,” the AJC said, adding that the organization is interested in learning about Tillerson’s positions on U.S.-Israel relations, Iran, human rights and how to confront violent radical Islam.

Morton A. Klein, president of the Zionist Organization of America, is giving the incoming Trump administration the benefit of the doubt on its secretary of state pick.

“Since Donald Trump and most of his top aides are strongly pro-Israel, I don’t believe they would have allowed this appointment if [Tillerson] were hostile [to Jewish or Israeli interests],” Klein told JNS.org. “It also bodes well that his company, ExxonMobil, has funded research at [Israel’s] Ben Gurion University and has done significant business with Israel.”

Klein added that if Bolton, who has strong pro-Israel credentials, is in fact appointed as deputy secretary of state, it would “add to our comfort level.”

“Maybe [Tillerson’s] strong relationships with Arab countries and Russia would enable him to convince them to modify their hostile attitudes [toward Israel],” said Klein. “Remember, we all worried about [former President Ronald] Reagan’s Secretary of State George Shultz’s close ties to the Arab world, and he turned out to be a friend [of Israel].”