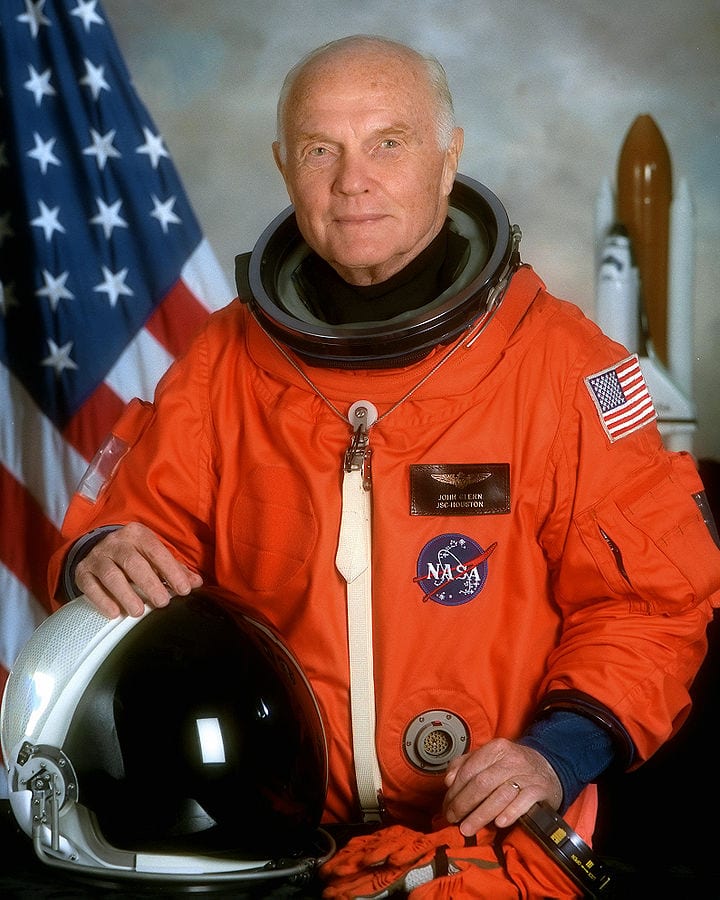 John Glenn Jr., a WW II fighter pilot, the first American astronaut to orbit the Earth, and US Senator, passed away on Thursday at the age of 95.

Glenn quit college to enlist in the US Navy after the Japanese attack on Pearl Harbor in 1942, later transferring to the Marine Corps, and flying 59 combat mission in the South Pacific. Glenn later served in the Korean war, flying 63 combat missions and gaining notoriety for attracting enemy flak. He later became a test pilot, winning his fifth Distinguished Flying Cross for a record-setting transcontinental  flight.

Glenn became the first American to orbit the Earth in 1962 in the Friendship 7 spacecraft. In 1998, at the age of 77, Glenn returned to space on the Space Shuttle Discovery as a Payload Specialist becoming the oldest person to go into space.

Glenn was elected as a Democratic  Senator for Ohio in 1974 and served in that position until he retired in 1999.

Glenn had a love-hate relationship with the Jews. His best friend and business partner, Henri Landwirth, was a Holocaust survivor with numbers tatooed on his arm from a Nazi death-camp. He once told Landwirth, “If it were me, I’d wear that number like a medal with a spotlight on it”.

Despite being a Democrat and an American hero, Glenn had difficulty attracting support from the Jewish community. In 1979, Senator Glenn voted in favor of selling F-15’s to Saudi Arabia, a move that earned him the ire of Israel supporters. Glenn later explained his motives, claiming that if America didn’t sell the warplanes to Saudi Arabia, they would turn to France, which sold their armaments without restrictions attached.

Fourteen years before the Oslo accords were signed in 1993, Glenn supported negotiations between Israel and the Palestinian Liberation Organization (PLO), despite it being internationally recognized as a terrorist organization. That issue led to Glenn losing his temper at a private dinner party. In the midst of a heated discussion on the topic, he compared Menachem Begin and the Irgun, a far right paramilitary group in British Mandate Palestine, to the PLO. This was considered unforgivable by the Jewish electorate, and was credited as one of the reasons Glenn was unsuccessful in his presidential bids for election.

Glenn was survived by his wife of 73 years, Annie, two children, and two grandchildren.