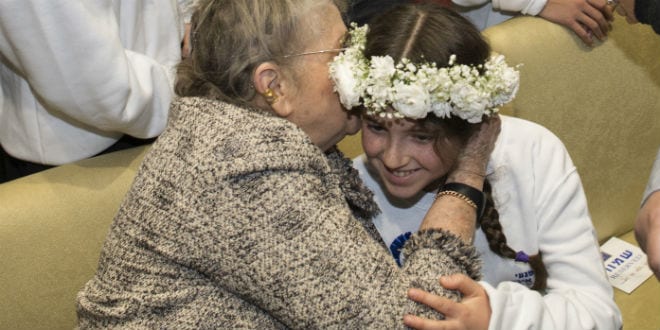 President Reuven (Ruby) and Nechama Rivlin hosted a bar and bat mitzvah ceremony Monday at the president’s official residence in Jerusalem for children who have been victims of terror attacks. Rivlin said the young adults “bear the scars of the Jewish people’s fight for its homeland.”

Rivlin also blessed the young adults with a prayer for easy lives that are full of love. “You deserve the best of what life has to offer, and then some. Mazal tov, from me and from the entire Jewish people. We love you.”

Noa Meir, the daughter of Dafna Meir, who was murdered in the kitchen of her home in Otniel earlier this year, spoke on behalf of the bar and bat mitzvah children, saying she spent many evenings planning the celebration with her mother, and added that the conversations often stretched well into the night.

“Ima (Hebrew for ‘mother’) and I dreamed together about what it would look like,” the surviving daughter recalled. “I could visualize the dress I would wear, what the guests would look like. I dreamed about the presents I would get. It was my secret with Ima.

“I always loved my conversations with her, even late in the night when Abba (Hebrew for ‘father’) would come and tell us to go to bed already. It never worked -it was our secret that we loved talking so much that we would go on and on,” said Noa Meir.

Meir said that in day-to-day life she misses her mother a lot, but added her belief that her mother is watching her grow up from On High, and that she felt her presence strongly at her bat mitzvah. “I will flourish and grow and I will be a phenomenal memorial and proud daughter for my mother Dafna… despite everything, we are a nation that desires life,” she added.

Rivlin also said that “some of you have lost parents or other precious family members. This is the time to say ‘thank you’ to the mothers and fathers who are here and to remember those who accompanied, and continue to accompany your lives with their strong spirits, their heroism and their love, even when they are no longer with us in body,” Rivlin added.

“You are leaving childhood and entering adulthood,” added Minister of Labor, Welfare, and Social Services Haim Katz. “There is no question that some of you have had adulthood forced on you at an early age, via the incidents you’ve gone through.

The future of our country requires the best of our brains and our energies of the young generation, you – our children – bear the promise of the State of Israel’s superiority in all areas. I wish you the best of luck,” Katz said.