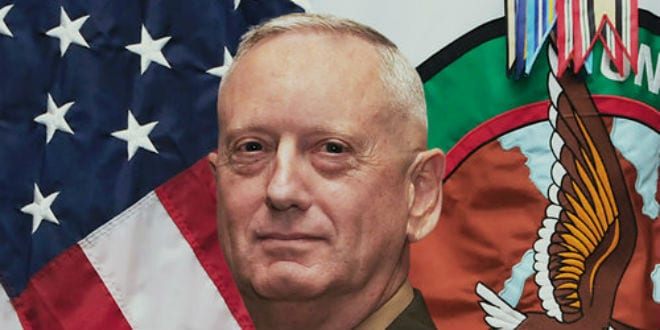 President-elect Donald Trump announced Thursday evening that he would nominate retired Marine General James Mattis as his next secretary of defense.

“We are going to appoint ‘Mad Dog’ Mattis as our secretary of defense,” Trump said at a rally in Cincinnati.

Mattis, 66, is a retired four-star Marine general who served as U.S. Central Command (CENTCOM) commander from 2010-2013. His nickname stems from his widely praised leadership among his fellow Marines during the Battle of Fallujah in Iraq in 2004.

Last month, when it was rumored that Mattis would be Trump’s choice for defense secretary, the Zionist Organization of America (ZOA) urged the president-elect against the appointment over controversial statements Mattis has made about Israel.

At a 2013 Aspen Institute conference, Mattis said he “paid a military-security price every day as a commander of CENTCOM, because the Americans are seen as biased in support of Israel, and that moderates all the moderate Arabs who want to be with us, because they can’t come out publicly in support of people who don’t show respect for the Arab Palestinians.” Mattis also described Israel’s control over Judea and Samaria as “unsustainable” and warned that Jewish settlements would turn Israel into an “apartheid” state.

The ZOA said Mattis’s past comments “revealed a lack of appreciation for and understanding of the extraordinary value to American security resulting from a strong American-Israeli alliance and a secure Israel.” As such, ZOA President Morton Klein opposed Mattis’s rumored appointment.

But the Jewish Institute for National Security Affairs (JINSA) dismissed the concerns over Mattis, calling them “ill-founded and unfair.”

“On the larger U.S. military and strategic issues related to the Middle East…General Mattis has notably and indisputably distinguished himself in advocating for a more robust U.S. military posture to counter, contain and deter Iran, even at the peril of his military career,” JINSA said in a statement, adding that “General Mattis’ outlook on these issues aligns perfectly with Israel’s, which considers an aggressive Iran its greatest strategic threat, and a nuclear Iran to be an existential threat.”