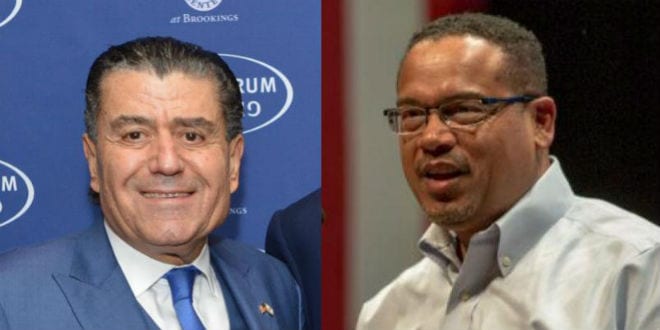 Movie mogul and major Democratic party donor Haim Saban on Friday night at a Brookings Institution dinner attacked Minnesota Congressman Keith Ellison, a leading candidate in the race for chairman of the Democratic National Committee, calling him an anti-Semite.

Former Vermont Gov. Howard Dean dropped out of the DNC race on Friday, urging Democrats to elect only a full-time chairman, implying Ellison would not make an effective party leader because of his Congressional commitments. Speaking on Friday to state party chairs in Denver, Ellison said that if he’s elected chairman, he’d consider leaving Congress to devote his attention to rebuilding the party.

The fact that Ellison may be the next Democratic party decision maker stirred up Saban’s harsh response.

Speaking from his table at the dinner, Saban said: “I would just like to clarify something about Keith Ellison and him running for head of the DNC. […] I think it’s important for this audience to know. First, the fact that Keith Ellison is a Muslim is a non-issue at all. That is not an issue. With that out of the way, if you listen to Keith Ellison today and you see his statements, he’s more of a Zionist than Herzl, Ben-Gurion and Begin combined. I mean, really, it’s amazing, it’s a beautiful thing.”

Then Saban delivered his punch line: “[But] if you go back to his positions, his papers, his speeches, the way he has voted – he is clearly an anti-Semite, an anti-Israel individual. Words matter, and actions matter more. Keith Ellison would be a disaster for the relationship between the Jewish community and the Democratic Party. Now I’ve said what I had to say.”

On Thursday, ADL CEO Jonathan A. Greenblatt, not a rightwinger in anyone’s book, issued an almost identical statement, albeit in a less blunt style:

“When Rep. Ellison’s candidacy to be chair of the Democratic National Committee was first reported, ADL did not rush to judgment.  Instead, we took a hard look at the totality of his record on key issues on our agenda. We spoke to numerous leaders in the community and to Mr. Ellison himself. ADL’s subsequent statement on his candidacy appreciated his contrition on some matters, acknowledged areas of commonality but clearly expressed real concern where Rep. Ellison held divergent policy views, particularly related to Israel’s security.

“New information recently has come to light that raises serious concerns about whether Rep. Ellison faithfully could represent the Democratic Party’s traditional support for a strong and secure Israel. In a speech recorded in 2010 to a group of supporters, Rep. Ellison is heard suggesting that American foreign policy in the Middle East is driven by Israel, saying: “The United States foreign policy in the Middle East is governed by what is good or bad through a country of 7 million people. A region of 350 million all turns on a country of 7 million. Does that make sense? Is that logic? Right? When the Americans who trace their roots back to those 350 million get involved, everything changes.”

“Rep. Ellison’s remarks are both deeply disturbing and disqualifying.  His words imply that U.S. foreign policy is based on religiously or national origin-based special interests rather than simply on America’s best interests. Additionally, whether intentional or not, his words raise the specter of age-old stereotypes about Jewish control of our government, a poisonous myth that may persist in parts of the world where intolerance thrives, but that has no place in open societies like the U.S. These comments sharply contrast with the Democratic National Committee platform position, which states: “A strong and secure Israel is vital to the United States because we share overarching strategic interests and the common values of democracy, equality, tolerance, and pluralism.”

It appears that with or without Ellison at the Helm, rank and file Democrats are abandoning their party’s traditional relationship with the Jewish State. Israeli born Prof. Shibley Telhami, introduced a survey of “American attitudes on the Israeli-Palestinian conflict” at the Brookings Institute Saban Forum 2016, using 1,528 panelists with a 2.5 percent margin of error, that included the question: “Is Israel an ally or a burden to the United States?”

Most respondents, 76 percent, across party lines, agreed that Israel is a strategic asset to the U.S. But a majority of Democrats (55 percent), say that Israel is also a burden.