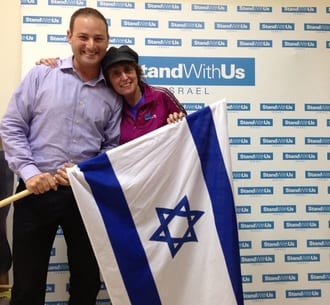 In a few weeks , at a small coffee house in Gush Etzion, a mixed group of people will gather to sing ‘Happy Birthday’ to a young man. This small get-together, an entirely improbable happening, is the result of two people believing in Arab-Israeli coexistence against all odds.

Kay Wilson, the survivor of a horrific terror attack in Israel and an international speaker condemning Palestinian terrorism, is behind the gathering. The young man whose birthday they will be celebrating is a Palestinian and, as such, should have been Kay’s enemy. But instead, he became her dearest friend.

On December 18, 2010, British-born Israeli Kay Wilson, a Jewish tour guide living in Israel, was hiking in the Mata Forest near Jerusalem guiding her friend, Kristine Luken, a Christian-American. They were set upon by two Arab men, who tied their hands behind their backs and stabbed them multiple times with a long serrated knife. Wilson was forced to watch in horror as her friend was murdered.

Wilson herself was stabbed 13 times, one stab wound missing her heart by only four millimeters. With her hands still bound behind her back, Wilson staggered, barefoot and bleeding, for more than 1,200 meters before she reached a parking lot where a family alerted the authorities. She was hospitalized in critical condition but eventually recovered.

Today, Wilson is a speaker for StandWithUS, an Israeli advocacy agency, and One Family Together, an Israeli NGO that helps Israeli victims of Palestinian terrorism. She is in the process of writing a book about her attack and the life lessons she learned from it. In March, she addressed the United Nations Human Rights Council (UNHRC), confronting them with a truth they work hard at denying.

“I also tell my story so that Kristine will never be forgotten,” Wilson told Breaking Israel News.

A few months after the attack, Salim (not his real name) contacted Wilson via social media. In broken English, he explained that he was a Christian Palestinian living not far from Jerusalem. At home, in school, and in church, he had been taught to hate Jews, for religious as well as nationalist reasons. Nonetheless, he was disturbed by the accounts of the attack on Wilson. Salim told her that he felt terrible about the attack and was sorry that it had happened. They exchanged phone numbers, and eventually met.

“He is simply an amazing guy,” explained Wilson to Breaking Israel News. “He read the Bible and saw that God loved the Jewish people and that God had given the land to the Jews. He had a kind of spiritual awakening and that led him to contact me.”

Despite her experience, or perhaps because of it, Wilson accepted his offer of friendship.Their friendship grew, but it remained a secret. Salim advocates for Palestinian coexistence with the Jews in Israel, and this puts him at risk. Being friends with Wilson, an outspoken advocate for Israel and a powerful voice condemning Palestinian terrorism, could seal his fate.

“Christian Arabs are between a rock and a hard place,” said Wilson. “They can’t really speak out too much.”

In a remarkable coincidence, Kay discovered that Salim’s birthday was the same week as the anniversary of the attack. She asked Salim what he wanted as a gift.

“‘I want to sit with Jewish settlers, eat cake, and sing ‘Happy Birthday’ in Hebrew,” he told Wilson.

The request was irresistible, though making it happen proved to be much more difficult than just blowing out candles and making a wish. The details of the party had to remain a closely-guarded secret. Because he lives over the Green Line, Salim is restricted in his ability to travel, and Jewish settlers are forbidden from entering areas under control of the Palestinian Authority. But Wilson was determined to give Salim the present he wanted.

“This is very powerful and can really make a difference,” said Wilson. “We can’t do this generic carte-blanche hatred of people. We have to break it down into individuals, and separate them from the institutions. Even after what I went through, if I begin to feel any hatred, I see his face. It gives me moral clarity  and I realize that I must not hate all Palestinians.”

Wilson explained that her motives were not based in a desire for universal forgiveness.

“I’m not one of these  ‘give-out-flowers-to-everyone’ kind of people. I do believe we should hate some people, people who are immoral,” said Wilson, adding, “I will not forgive people who are not remorseful. I certainly don’t have a license to forgive on behalf of Kristine.”

Salim has a mission outside of befriending his Jewish neighbors. He meets with Christian philanthropies that are considering donating to Palestinian causes which pose as humanitarian, but are actually breeding grounds for hatred and anti-Semitism. He explains his personal story, presenting his opinion, trying to dissuade them from supporting what he sees as the obstacles to coexistence. He works tirelessly and under great threat to prevent their success.

Kay has great hopes that this small birthday party can make a big difference. “It’s just little old me and a few friends. But isn’t that how big changes start?”