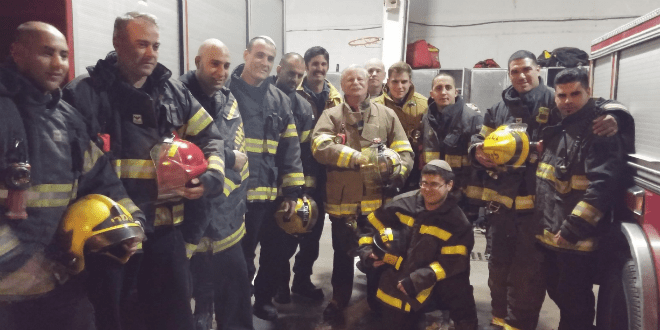 Forty American firefighters deployed to Israel last week to help their Israeli counterparts battle the massive fires which spread across the country in recent days, leaving hundreds homeless and destroying thousands of dunams of land.

Part of a reciprocal program launched in 2009, the firefighters came from as far away as Dallas and Los Angeles, the Jerusalem Post reported, with some traveling for over 20 hours to reach the Holy Land.

“We were put on standby two days ago, and in less than 24 hours we were told we were going to fly out,” said Ben Arnold, 32, from Los Angeles. “Within four hours, we had our tickets, said goodbye to our families, and got on the plane.”

1st of 40 volunteers landed in israel, greeted by @idfonline HFC, USAID, US national guard and reps from Ministry of Public Security. pic.twitter.com/c8kifRvsUM

For many, there was no question that they would come to Israel’s aid.

“It’s pretty simple for me: It’s firefighting,” Rick Nesser, part of the Dallas Fire Department for 32 years, told the Post. “Back home, if another city calls for help, it’s called ‘mutual aid,’ and we go help them. There is no question; you just do it. This isn’t any different for me. If Israeli firefighters need some help, we come out and help them.

The program, called the Emergency Volunteer Project (EVP), began bringing US firefighters and other first responders to Israel in 2009 to train them in working with Israel’s emergency services and civilians. Prior to the recent spate of forest fires, EVP volunteers last deployed in Israel during 2014’s Operation Protective Edge.

Yesterday the rest of our 40 firefighters landed in Israel to help support their israeli brothers. #IsraelFires pic.twitter.com/tUtNI1yuSm

“The Emergency Volunteer Project is a nonprofit organization that understands that however expert [Israeli] emergency services are, they’re only so big, and in large-scale emergencies we need additional manpower,” explained EVP spokesman Eitan Charnoff on Sunday night on the need for such an organization.

“The EVP has set out to train in advance American rescue personnel to specifically deploy to Israel, and know how to work here during emergencies.”

In coordination with Fire Services, IDF Home Front Command, and the Health and Public Security ministries, EVP has trained over 950 emergency volunteers and first responders in the US and Israel.

Its Firefighting and Rescue Units are the first-ever of their kind, according to the EVP website, which gather individuals from around the world to come together as active emergency volunteers for Israel’s firefighting and rescue services.

The latest group to arrive, made up of men ranging from age 30-60, will remain in the country for one week, helping to tamp down the remainder of the over 200 fires which raged through Israel since last Tuesday, only coming under control on Sunday. Most of the volunteers have already been to Israel several times for training, and some also came for Protective Edge.

The volunteers praised Israeli firefighters, but noted that there’s a deficiency in numbers.

“The firefighters here are great,” said Nessner. “They know what they’re doing, but there’s just not enough of them, and when a big event like this happens they just get overwhelmed.”

Arnold called Israel’s firefighters “outstanding”, saying that the “brotherhood of firefighters” bonded them closely together.

“I’ve worked with these guys before, and consider them family, and if there is anything I can do to help Israel and my fellow firefighters, I am willing and love to do it,” he said.

For their part, Israeli firefighters are grateful to accept their American brothers’ aid.

“I think they are the greatest,” Shiran Luzon, a 36-year-old Israeli firefighter, said of the US volunteers. “We count on them and we rely on them, and treat them like our brothers. And I know that if they ever needed help, I would go help them also.”