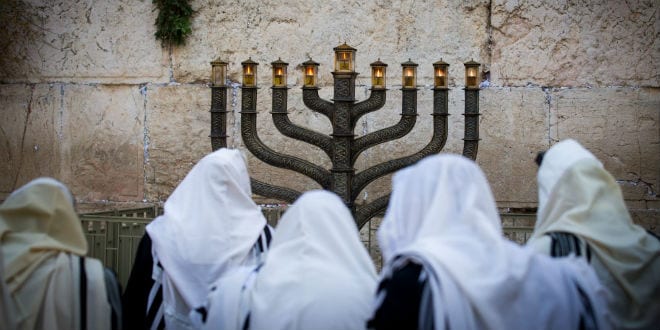 A ritually pure oil has been carefully prepared by the nascent Sanhedrin so that the people of Israel will be ready to light the menorah should the Third Temple arrive by Hanukkah, which this year begins on December 24.

“The oil is ready, so if the government decided to permit it, we are ready to go up to the Temple Mount and light the menorah,” affirmed Rabbi Yaakov Savir, appointed by the Sanhedrin to oversee the complex oil-making process.

He explained that lighting the menorah is actually considered a ritual offering to God: “The oil is burned just like an animal sacrifice and is considered one of the daily Temple offerings.”

Interestingly, the Temple itself is not actually needed to perform the commandment of lighting the menorah, though in current times it would be extremely difficult to take a menorah onto the Mount, let alone light it there, as any type of Jewish prayer is not permitted. However, the Sanhedrin remains hopeful.

“We can do this part of the Temple service on the Temple Mount right now without building a Temple. We are preparing the oil now, so that if the situation suddenly arises, we will be ready to perform this mitzvah (Torah commandment),” Rabbi Savir told Breaking Israel News.

In a few weeks, all of Israel will be recreating the Temple mitzvah in their homes when they light the eight-branched domestic version of the seven-branched Temple menorah. Lighting the Hanukkah menorah is the only time Jews are commanded to recreate an aspect of the Temple service in their homes.

Ayal Kellman, manager of the Israel365 Store, noted that many non-Jews also purchase menorahs, either to participate in the mitzvah of lighting or simply to show love for Israel and the Jewish people. “In addition to being used for ritual observance, the menorah can also be a public display of support for Israel, as it is the official state emblem, and is often displayed in synagogues, homes and churches around the world,” Kellman told Breaking Israel News.

Rabbi Hillel Weiss, spokesman for the nascent Sanhedrin, emphasized the importance of the menorah in connecting individuals to the Temple.

“God arranged it so the holiday of Hanukkah comes just after the harvest of the olives,” Rabbi Weiss told Breaking Israel News. “Lighting the menorah during this season, when the oil for the Temple was being prepared, connects the home to the Temple.”

The special oil will be lit on the sixth night of Hanukkah, the evening of December 29, with the wooden replica menorah. The ceremony will take place in Jerusalem, and Kohanim (men of the priestly caste) dressed in their priestly garb will light the oil, just as their ancestors did in the Temple.

The Biblically-mandated process for preparing the oil is complicated, and Rabbi Savir has made small batches for several years, working at recreating the exact process used by priests when the Temple was standing.

“The Torah specifies that the olives are pounded. No other means of extracting the oil is permitted by halacha (Torah law),” explained Rabbi Savior.

And thou shalt command the children of Israel, that they bring unto thee pure olive oil beaten for the light, to cause a lamp to burn continually. Exodus 27:20

“After pounding them individually, the olives are allowed to sit for several days without any pressing so the oil can drain out of them. The yield is very low, only about two percent, but the quality, measured by the oil’s acidity, is far superior to any other method.” On Wednesday, assisted by a group of volunteers, Rabbi Savir prepared 45 pounds of olives, which should produce a little over two and a half quarts of oil.

Rabbi Savir explained his motives for making the Biblically-mandated oil.

“There is an opinion that the Temple will come down from heaven without any effort on our part. That is not my opinion, though I would not be upset if that happened,” he told Breaking Israel News.

“It is clear though, that the Temple will be rebuilt. It may happen sooner or it may happen later, but people are becoming more conscious of  the Temple, studying about it, and the number of visitors to the Temple Mount is rising rapidly. It is inevitable that the will of the people, their desire to build the Temple, will become a reality.”

When it does, the menorah – and its oil – will be ready.