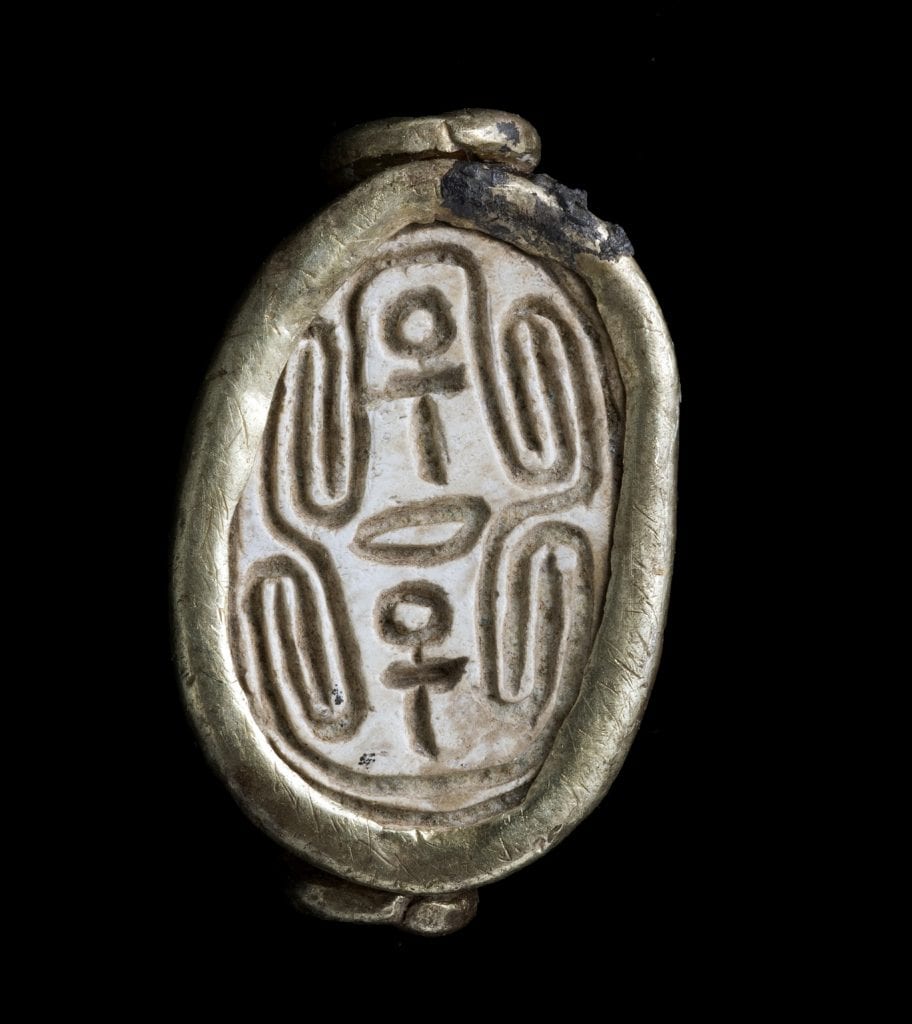 Israeli archaeologists announced the discovery Monday of a rare treasure of gold and silver objects dating back about 3,600 years to the Middle Bronze Age, or the Canaanite period. They were found in the archaeological site of the Tel Gezer National Park, in the Judean foothills near Beit Shemesh.

The excavation was conducted by Dr. Tzvika Tzuk, Director of Archaeology for the Israel Nature and Parks Authority in collaboration Dr. Eli Yanai, a retired Israel Antiquities Authority researcher and Drs. Dan Warner and Jim Parker from the New Orleans Baptist Theological Seminary.

“This finding is a very significant find to help date the building and show the cultural transference from Mesopotamia all the way in history down to the State of Israel,” stated Dr. Warner, who is also historian and Bible teacher.

The treasure constitutes a foundation deposit for the rooms which, according to the archaeologists, represented offerings to deities, a theory supported by the administrative nature of the building and its proximity to the city gates.

“This is a foundation deposit, we found it underneath the house. They placed it there to appease the gods so that their house would still stand. These are the tallest preserved walls from this time period anywhere in Israel,” Dr. Warner told Tazpit Press Service (TPS).

Researchers managed to separate the findings into five separate parts, while some fragments of silver pieces such as rings and necklace could not be separated due to intensive corrosion.

The central deposit is a pendant with an eight-pointed star within a 3.8 cm diameter disc and a crescent on top of it, which represents a well-known symbol dating to over 1000 years before that time period. Dr. Irit Ziffer identified the symbol as representing both Ishtar, the Mesopotamian East Semitic goddess of fertility, love, war, sex and power, as well as the Chinese moon god of the Akkadian culture.

The rest of the treasure is comprised of  golden banded scarab from Egypt dated to the Hyskos period, a silver chain, an earing, and another pendant that resembles an arrow.

The treasure was found in one block wrapped in cloth deposited in lidded pottery. Dr. Orit Shamir and Dr. Naama Sukenik of the organic material laboratory of the IAA identified the cloth as linen cloth according to the shape of the threads and weaving techniques.

Dr. Warner told TPS that the fabric it in which the treasure was wrapped is one of the oldest pieces of fabric found in Israel, apart from the ones discovered in Megiddo, while only two textile samples from the Canaanite period were found, one in Jericho and one in Rishon LeTzion.

“During the Canaanite period, Gezer was one of the cities of primordial importance in Israel and its significance continued until the moment King Solomon built the city anew ,” said Shaul Goldstein, CEO of INPA.

“This finding is  a significant achievement, which sheds light on the Canaanite culture in Israel more than 3600 years ago, and further consolidates the position of Tel Gezer National Park site as an archaeological gem with great significance to Israel,” Goldstein said.