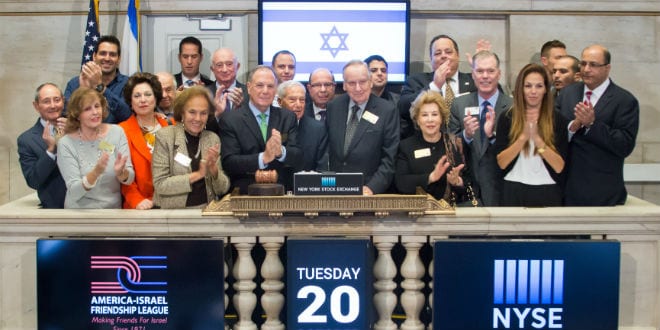 The 10th annual AIFL Israel Day at the New York Stock Exchange (NYSE) will highlight Israel’s business and high tech advancements and mark its presence on Wall Street on Thursday, as the country that ranks as the largest foreign presence outside of China and Canada. Organized by the America-Israel Friendship League (AIFL), in partnership with SOSA and Israeli Mapped in NY, the day will begin with a celebratory ringing of the NYSE opening bell.

There are over 450 Israeli equities currently listed on exchanges around the world in a vast array of industries, with more than 100 on Wall Street alone. In recent years, well-known Israeli companies like Mobileye, Teva, and Check Point Software have headlined a list of cutting-edge IPOs.

“The level of Israeli equities listed on Wall Street is yet another example of Israeli innovation and the strong US – Israel relationship,” said Daniella Rilov, Executive Director of the America-Israel Friendship League. “It’s exciting to see the Israeli flag side by side with the American flag during the opening bell,” Rilov told Tazpit Press Service.

“Not only are we recognizing these outstanding companies at Israel Day, but the event is also honoring four Israeli women leaders, because Israel, like the United States, celebrates its gender diversity,” she explained. “The day is an example of just a few of the common traits both countries have.”

Israel Day at NYSE first began as part of the AIFL Israeli business leaders’ delegations to the United States in 2007, led by the late Benny Gaon, who was the AIFL’s Chairman in Israel at the time. As a tribute to Gaon’s good relationship with the NYSE, he was honored to ring the NYSE trading bell. Over the years, the program has grown and today serves to spotlight business innovations that can establish new partnerships and join investments and create new employment opportunities in both the USA and Israel, according to Rilov.

This year, Israel Day at the NYSE will honor four leading Israeli women who boast a track record of success and achievements in their field of expertise, and who have significantly contributed to the US – Israel relationship in business, economy, science, high-tech and fashion. A special session moderated by Inbal Orpaz, The Marker high-tech correspondent, will feature the Israeli women who include Tzameret Fuerst, the co-founder of Circ MedTech, which developed Pre-Pex, an FDA-approved device for HIV protection; Karen Haruvi, SVP Global Generic Business Development and Alliance Manage for Teva Pharmaceuticals, Ltd.; co-founder of 24me, Liat Mordechay Hertanu; and fashion designer and artist, Noa Raviv, whose work is featured in the Metropolitan Museum of Art.

Another session, organized by BlueStar Indexes, a financial firm specializing in Israeli capital markets and a partner in the event, will include a panel active in Israeli investing. CNBC producer, Jason Gewirtz will lead the panel through a discussion highlighting hot market trends coming out of Israel and how interested parties can support Israel through an investment avenue in Israeli companies, ETFs and funds.

“There is a great opportunity now for those who care about and support Israel with their charitable donations and community involvement to add another, equally-powerful track to their pro-Israel activity via their investment portfolio. Investment in Israel is the antidote to BDS (Boycott, Divestment and Sanctions),” pointed out one of the panelists, Steven Schoenfeld, CEO of Bluestar Indexes.

“Investing in Israel is good for your portfolio in terms of returns and diversification; it is good for Israel’s capital market development and economic growth; and it is good for realigning the relationship between the Diaspora and Israel to a framework which is more appropriate for the second decade of the 21st century,” remarked Shoenfeld.

“One should invest in Israel not just to support the Jewish State, but because it is a solid investment that historically has outperformed most other international equity investments over the past three, five, and ten years,” he concluded.