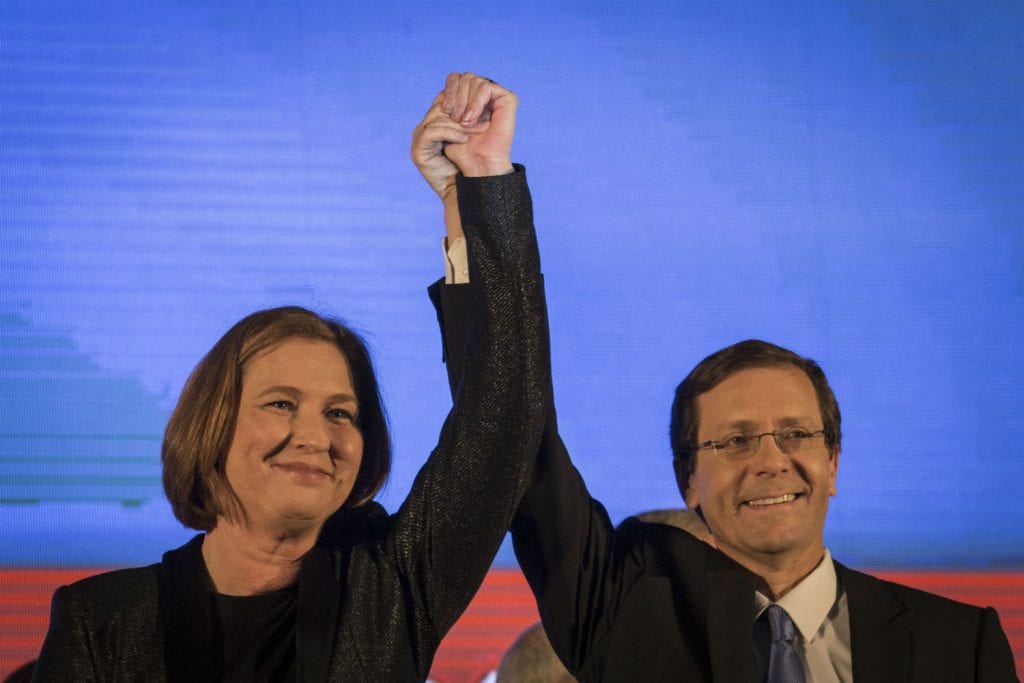 50,000 Israelis gathered in Rabin Square, the site where Prime Minister Yitzchak Rabin was assassinated 21 years ago, for a memorial ceremony, but the event quickly changed into a one-sided political mud-slinging fest.

The rally was almost cancelled last week when the youth groups and NGO’s that normally fund the annual event announced they would no longer be memorializing Rabin in this manner. After an initial attempt to raise the $200,000 required for the rally came up $60,000 short, the Labor Party, the party Rabin headed, made up the difference.

“Twenty-one years on, the incitement is the same incitement and the leader is same the leader,” said Herzog to the crowd. “We can no longer let anyone, not a bully nor a leader, continue to incite — not a Knesset member, not a minister and not the prime minister.”

“We say yes to democracy, to moderate Judaism, yes to peace, yes to the values that established this country,” said Livni. “This is the biggest fight that we have, more important than any person or party.”

This led the crowd to begin chanting, “Bibi, go home!”

“We in opposition are not afraid and do not apologize, you can call us what you want prime minister — that we forgot to be Jews, but no one will tell what Zionism is. Zionism is equality. Zionism is defending minorities. Zionism is security for the State of Israel and not isolated settlements. Zionism is the most moral army in the world, that makes peace with the Arab world, that separates from the Palestinians in peace,” Livni told the crowd.

Head of the ultra left-wing Meretz party, Zehava Galon, was even more critical of Netanyahu.

“The murder was the result of a propaganda machine. The prime minister who was then on the balcony and the incitement continues to this day,” accused Galon.

Rabin became the symbol of the Oslo Process, winning the Nobel Peace Prize along with Shimon Peres and Palestinian leader Yaaser Arafat in 1994. Rabin was shot and killed by Yigal Amir, a right-wing extremist, on November 4, 1995 during his second term as Prime Minister.

The rally last year commemorating the 20th anniversary of Rabin’s death was attended by over 100,000 Israelis.