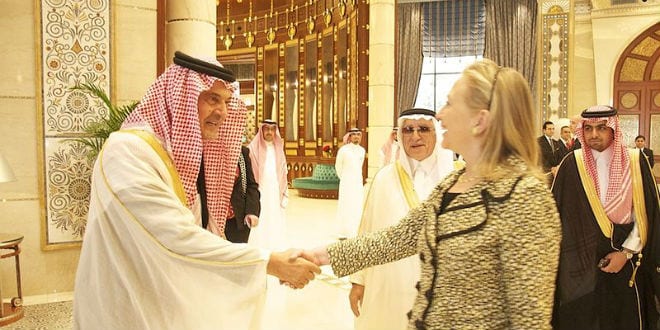 Democratic nominee Hillary Clinton has received more campaign contributions than any other U.S. politician from “individuals who subscribe to the same Islamic supremacism as Khomeini, Bin Laden and ISIS,” reports the Middle East Forum think tank.

Clinton was ranked first on the group’s 2015-2016 “Islamist Money in Politics” list of politicians who have taken money from prominent Islamists with ties to terrorist organizations.

Clinton took $41,165 from people attached to these organizations, including $19,249 from senior leaders of the Council on American-Islamic Relations (CAIR), deemed a terrorist organization by the United Arab Emirates in 2014, according to the Middle East Forum. In 2007, CAIR was named an unindicted co-conspirator in the FBI’s case against the Hamas-linked Holy Land Foundation, which was eventually found guilty of aiding Hamas.

In one instance, Clinton accepted $3,000 from former CAIR vice chairman Ahmad Al-Akhras, who has defended in Ohio numerous Islamists, who were indicted and later convicted of terrorism, the report states.

Others on the list include Rep. Keith Ellison (D-Minn.), who received $17,370, and Rep. Andre Carson (D-Ind.), who netted $13,225. Ellison and Carson are the first and second, respectively, Muslims elected to the U.S. Congress.

The Middle East Forum’s Islamist Money in Politics project, which started in 2014, raises awareness of Islamist influence in U.S. politics by making public the campaign contributions of 1,356 leading figures in America’s most important Islamist group. To date, the project has documented 2,974 Islamist contributions worth $1.43 million.