MK Yehudah Glick to Judge Who Reprieved Terrorist Killer: Can You Cleanse Your Hands of Blood Before God?

Home » MK Yehudah Glick to Judge Who Reprieved Terrorist Killer: Can You Cleanse Your Hands of Blood Before God? 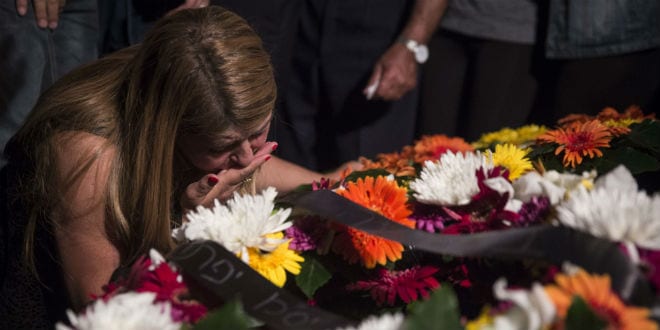 The Jerusalem judge who granted a terrorist’s request to delay his imprisonment, thereby enabling him to shoot and kill two Israelis in Sunday’s fatal terror attack, has the victims’ blood on her hands, accused Knesset member Yehudah Glick (Likud) on Monday.

“Honorable Mac-Kalmanovich,” Glick, an ardent Temple Mount rights activist, wrote in a Facebook post, “even though it is Erev Yom Kippur (the day before the Day of Atonement), I can’t forgive you. The blood of the dead is on your hands.”

On Sunday, a 39-year-old Palestinian terrorist from the Silwan neighborhood of East Jerusalem went on a shooting rampage at Jerusalem’s Ammunition Hill, killing two Israelis – a 60-year-old woman and a 29-year-old police officer engaged in the exchange of fire between the terrorist and security forces.

After the terrorist was shot dead by police, Israeli media reported that he had been due to begin a four-month jail sentence on Sunday for assaulting a police officer in the Old City in 2013. Instead of reporting to jail, however, he carried out the deadly attack.

He had previously spent a year in jail, from January to December 2015, for incitement on Facebook and ties to terror organizations.

Hagit Mac-Kalmanovich, a judge in the Jerusalem District Court, had granted the terrorist a request to delay his imprisonment, allowing him onto the streets of Jerusalem.

Glick accused Mac-Kalmanovich of a history of sympathizing with terrorists, recounting his own court experience with her in 2014 after he was banned from the Temple Mount as a result of clashes with members of the Muraibitat, a radical Muslim women’s group which was paid by the Islamic Movement to harass Jewish visitors to the Temple Mount.

Glick pleaded his case, but he was denied and remained banned for another two years. “I will never forget how I stood before you on that Wednesday, October 22, 2014, begging for my life. I argued with all my strength that the plot against me had no beginning, middle, or end. But you chose to believe the terrorists rather than the Israeli police,” he wrote in his post.

The Muraibitat was later declared illegal by the state of Israel.

“I handed you a polygraph test that proved that I had not broken any rules. I asked you if you were even interested in the rules of procedure. You mocked me. You chose the terrorists and said that I am the dangerous one. You made this outrageous claim even though time after time it was I who was attacked on the Temple Mount, and yet I never lifted a finger or said a bad word to anyone. You would rather believe murderous lying terrorists!” Glick charged.

It was only a week after his court date that a terrorist, acting in the name of the Al Aqsa Mosque, tried to assassinate Glick, shooting him four times at point-blank range. The Knesset member attributed the attempt to Hagit Mac-Kalmanovich’s decision.

“Mutaz Hijazi shot me and tried to kill me, based on the support he received from you,” wrote Glick. “His assassination attempt couldn’t hurt me. Not like your attempt to crush me did. Eventually I was proven innocent.”

Glick’s Temple Mount ban was lifted in March of last year after he was acquitted of the charges against him. “Inconsistencies” in the testimonies of his accuser and witnesses led to the state withdrawing its indictment.

“Me, you would not listen to,” Glick concluded in his post, addressing the judge. “But the terrorist who was arrested so many times, that’s whom you listened to. You were cruel to the just and had mercy on the cruel.

“As a result of you delaying the terrorist’s four-month sentence, yesterday he killed two innocent Jews and wounded many others.

“Can you cleanse your hands of this on Erev Yom Kippur before God?”