Pence, Kaine Both Invoke Israel to Prove Opposite Points on Iran Deal During Debate

Home » Pence, Kaine Both Invoke Israel to Prove Opposite Points on Iran Deal During Debate 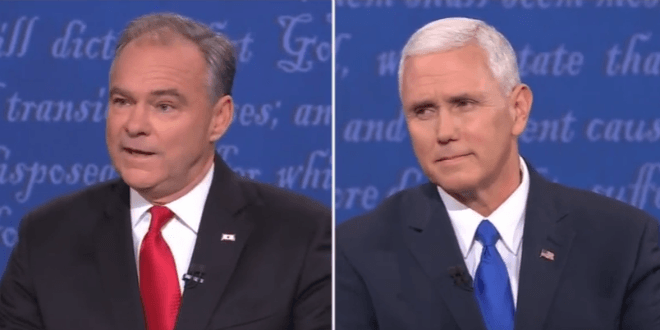 While Virginia senator Kaine argued that Israel’s military chief had acknowledged the success of the deal, pushed through Congress by President Barack Obama in strong opposition to Prime Minister Benjamin Netanyahu, Indiana governor Pence disagreed, saying that Israel still fears the deal will result in a nuclear Iran.

Kaine bragged that the deal had “stopped” Iran’s nuclear program “without firing a shot”, to which Pence responded, “You didn’t stop the nuclear weapons program. You essentially guaranteed that Iran will someday become a nuclear power because there’s no limitations once the period time of the treaty comes off.”

Kaine interrupted Pence to assert that “even the Israeli military says it stopped” Iranian nuclear activity.

Later in the debate, the two revisited the topic, with Pence slamming claims that the deal will prevent Iran from ever obtaining nuclear weapons.

“Gadi Eisenkot, you can go check it,” shot back Kaine, naming the IDF’s chief of staff.

While both vice presidential candidates relied on opposite stances from Israel to strengthen their arguments, both were, in a sense, correct, though Israel’s central position has been consistently against the deal.

Chief of Staff Eisenkot called the deal “a historic turning point” in January, saying that it marked “a big change in terms of the direction that Iran was headed, and in the way that we saw things.” However, he has never directly endorsed the deal, instead adopting a cautiously optimistic attitude after it became clear that the deal was going through.

“It has many risks, but also presents many opportunities. Our role is to look at the risk prism and the capability prism and to judge from that—not to assume that the worst-case scenario will take place, because that is as dangerous as the best-case scenario. Therefore, we are now revisiting our strategy,” he said.

Obama capitalized on Eisenkot’s comments in August when he proclaimed the total success of the deal on the one-year anniversary of its signing.

Netanyahu responded to the speech by saying that “Israel’s view on the Iran deal remains unchanged.”

Israel has maintained that the limitations imposed on Iran by the nuclear deal will virtually guarantee the Islamic and virulently anti-Israel country the capacity to establish a nuclear program within months of the expiration of the 10-year deal. Lifted sanctions will also provide Iran with millions to fund terrorism, Netanyahu has argued.

Netanyahu traveled to the US in March of 2015 to address Congress ahead of the signing of the deal, exhorting American lawmakers to fight it. However, many Democrats, offended that Netanyahu had not coordinated his talk with the Obama administration, did not attend.

Senator Kaine was among them, which Governor Pence brought up during Tuesday’s debate, accusing his opponent of “boycotting” Netanyahu’s speech.

Kaine countered by saying he had gone to see Netanyahu privately “in his office”.

The heated debate saw both running mates continuously interrupting each other, prompting intervention by the moderator. Flash polls by CNN afterwards gave Pence an edge, with 48 percent of those polled saying they felt the Republican had won the debate and 42 percent giving Kaine the win.