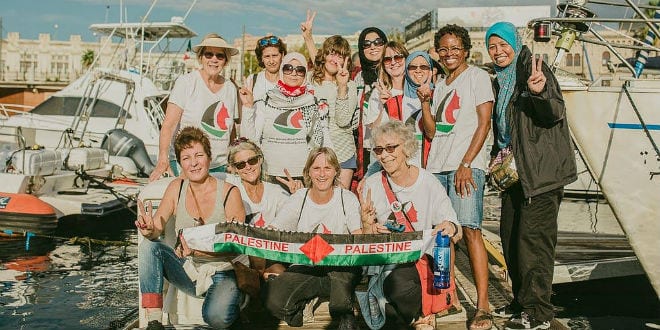 As the Zaytouna, a boat with about 15 Gaza-bound passengers, mostly women, are getting closer to Israel’s shores, the IDF navy has been preparing to exercise the routine protocol in such cases, namely to board the boats and escort the passengers, politely but firmly, to the harbor city of Ashdod.

The website Women Boat to Gaza has been billing the endeavor as a “flotilla,” but the term commonly describes a fleet of ships or boats, so, in this case, the term “boat” is probably more accurate.

Ashdod has been serving as a destination for aid supplies for Gaza for most of the decade since Hamas has taken over control of the Strip. Israeli officials go through the cargo, remove the contraband weapons and explosives that routinely arrive in those shipments, and clear the goods for trucking to Gaza, a few miles southward. Presumably, whatever goods the one or two boats manage to bring in will end up in Ashdod for inspection, followed by shipping to Gaza.

Israel’s Channel 2 News has reported that naval gunships have been waiting in Ashdod harbor for the signal to intercept the two boats. The same report suggested that the women on board the boats are planning to exercise civil disobedience.

The Zaytouna captain is retired US Army Colonel Ann Wright, who served in the State Dept. diplomatic corps. She resigned from the US government in 2003 over her objection to the Bush Administration’s foreign policy. Since then she has been active in every single attempt to break through the blockade on Gaza.

It should be noted that the Turkish government, which ended up in a six-year tiff with Israel over the tragic end of the largest and most memorable 2010 Gaza flotilla, has expressed its anger at the mostly Turkish activists in that endeavor for forcing it into this quagmire. Since Turkey has settled its dispute with Israel, Turkish goods destined for Gaza have been arriving in Ashdod regularly and then shipped to their intended recipients.

It should also be noted that the reason Israel has imposed a naval blockade on the Gaza Strip is because the Hamas government regularly declares its intent to destroy Israel, and has been devoting most of its international aid money to military preparations to carry out this threat.