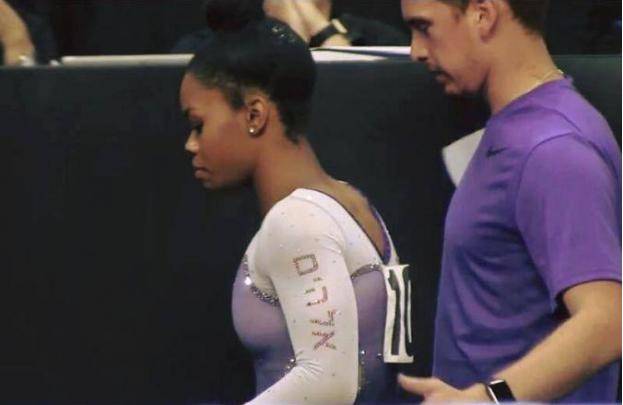 Should one ask multiple Olympic gold medal gymnast Gabby (Gabrielle) Douglas if she has any other unusual talents, she might just answer: being able to read and speak Hebrew!

Douglas has achieved many outstanding accomplishments in her life. In the 2012 Summer Olympics, she was a member of the United States women’s national gymnastics team, where she won two gold medals, one in the individual all-around and the second in the team competition.

She is the first gymnast in Olympic history of African descent to win the gold medal in the individual all-around competition. She also won a gold medal in the 2016 Summer olympics and has received numerous other medals in World Championships.

In her memoir, “In Grace, Gold, and Glory: My Leap of Faith”, Douglas writes,”I believe in God. He is the secret of my success. He gives people talent.” Douglas, a Christian, also states that she “used to be Jewish. Well not exactly Jewish—but my family practiced some of the Jewish traditions.”

Her mother, Natalie Hawkins, and maternal grandmother, both connected to Judaism, including studying Hebrew. “Hebrew has been learned by Jews and gentiles alike from time immemorial,” explained Roni Segal, the academic adviser for eTeacher, an online language academy, to Breaking Israel News. “It takes Bible study to a whole other level.”

Segal pointed out to Breaking Israel News that Gabby and her sisters all have significant Hebrew names. “Gabrielle in Hebrew means ‘God gives strength’”, said Segal. “Gabby’s sisters are named Joyelle, which means ‘God is willing’, and Arielle, which is the feminine form of Ariel, meaning ‘Lion of God’.”

Douglas noted that her grandmother would occasionally prepared kosher meals with “Jewish penicillin” matzah ball soup being her favorite. In fact, Douglas was given matzah ball soup as a reward for good grades and high scores in gymnastic competitions.

She also shared that her family attended Temple Israel in Norfolk, VA for a brief time and observed the Sabbath, though not strictly because gymnastic practice fell on Saturdays. Teen Vogue quoted Douglas saying that she loves “spinning the dreidel during the [Hanukkah] holiday.”

The talented gymnast has also said that her favorite book is the Bible. Her deep faith and connection to Hebrew was made public this past June at the P&G Gymnastics Championships, where she proudly wore a leotard with God’s name written in Hebrew on her sleeve.

Joyelle is credited with designing the leotard which features God’s name Eloheem (אֱלֹהִים). This particular name of God (there are several used throughout the Bible) implies that He is the Creator, the Mightiest, the Ruler and the True Judge. GK Elite, who produced the leotard, credits Douglas’ “rich heritage of faith” for the unique design.

Though Douglas has never publicly expressed a desire to convert to Judaism, her connection is clear. “Gabby’s strong faith and love of Hebrew is something she is proud to publicly display,” noted Segal. “At eTeacher we have been seeing a wonderful increase of non-Jews seeking to study the Holy Language. It enriches their lives.”