Three Abrahamic Faiths Come Together for Communal Prayer in Shadow of Mt. Zion 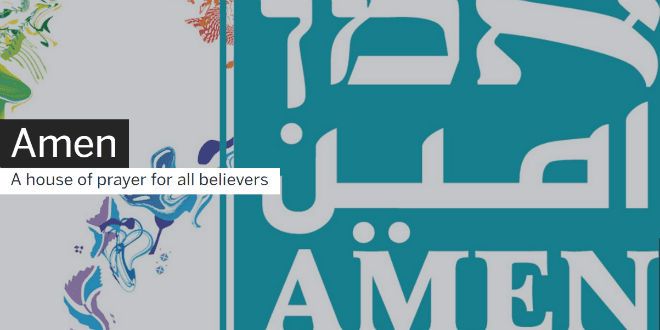 In the shadow of Mt. Zion, Jewish, Christian, and Muslim religious leaders and worshipers this month came together in a unique communal house of prayer, called Amen, for eight days. The singular event required over a year of planning, but in the end, eight religious figures – including an imam from the al Aqsa mosque – created a gathering which defied history, prejudice, and intolerance in the city holy to all three Abrahamic faiths.

The project, fully named Amen – A House of Prayer for All Believers, was part of the Mekudeshet Festival in Jerusalem, an annual cultural event “which draws its inspiration from reality, the people in Jerusalem and the fascinating processes that happen in and around it,” according to its website.

Amen, which began on September 5 and ended on September 11, was initiated over a year ago by Tamar Elad-Abblebaum, the female leader of an Orthodox Jewish community, and Muslim Sufi Sheikh Ihab Balah. Together, the two approached six other religious leaders of the major faiths which rule the city: two rabbis, a Franciscan monk, a Catholic priest, a Coptic deaconess and a female Muslim community leader.

All leaders were devout and traditional in their religious practice, but open to discussion with other belief systems. The success of the project was unprecedented, they said.

“I never believed something like this would be possible in my lifetime,” Elad-Abblebaum told the Guardian. “Jews who live in the territories publicly praying together with Palestinians, this is a big risk and a huge step.”

She emphasized that Amen was not intended to be political, but spiritual only. “This is not a political project; we wanted people to come from the right and from the left and to show that faith is beyond ideology.”

The eight leaders met nearly once a week over the last six months to discuss the project, at one point even traveling together to the desert to “practice” praying together. Many of them had never before participated in any sort of interfaith effort, and some had never even encountered members of the others’ communities.

Rather than combining the myriad traditions of the three faiths, each leader hosted one night of prayer in his or her own tradition. Most prayer was through music and song, and prayer books in Hebrew, Arabic and English were distributed to the diverse worshipers.

During prayer, “You realized suddenly we were all speaking the same language,” said Elad-Abblebaum, emphasizing the need to continue these kinds of unification efforts.

“It can’t just be a memory, this has to be the energy for the next step. We will use this as the seed to build Jerusalem a permanent place where all faiths can come and pray alongside each other.”

Of especial note was the participation of three imams. One came from the al Aqsa Mosque, located on the Temple Mount, one of the most controversial sites in the world; another Palestinian imam traveled from the city of Nablus, or Shechem, located in Samaria. All three Muslim leaders, fearing retaliation from their communities for participating, asked that their names be left off the project. Some of the other participants, including the Catholic reverend, used different names.

The fears mainly come from accusations of “normalizing” relations with Israelis, Ihab Balh told the Guardian, a huge offense in Arab communities. “Of course, accusations of normalization are a challenge and the reality of Jerusalem today is hatred and people fighting, but it’s important at the same time to plant the seeds of people coming together and seeing each other.

Waida Ibtisam Mahmeed, a respected Muslim community leader in an Israeli Arab town, said that she was working to diffuse the idea of Islam as a violent religion.

“Sometimes people, when they see the way I’m dressed in the street they are afraid of me because they think that every Muslim has a knife to stab a Jew,” she told the Guardian. “It is important to emphasize there is a difference between what I read in the Quran and how people act in the name of the Quran. God didn’t tell me to stand up and kill people.”

The three religions are different expressions of the same desire, she said. “For me Islam, Christianity, Judaism, it is all interconnected. We may pray in different ways with different texts but in the end we are all reaching for the same thing.”

The event took place at a small music school where both Jews and Muslims are taught. Located in the Valley of Hinnom, the school faces Mt. Zion, a site holy to all three religions.

Prayers were tailored to respect each religion’s holy days. On Friday morning, the congregation participated in Muslim morning prayers; on Saturday evening, there was a Shabbat closing service; and on Sunday, participants were invited to a mass.