The Cavalry Charge That Opened the Door to Messiah

Home » The Cavalry Charge That Opened the Door to Messiah 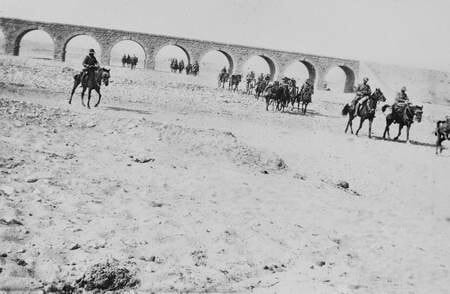 Next week marks 99 years since a little-known but significant battle for the Middle East in which a few brave Australians led a cavalry charge in Beersheba, opening up the door to Palestine, ending 400 years of Ottoman rule and allowing the beginnings of the Jewish return to take root. A Christian journalist living in Israel makes a compelling case that this battle was the culmination of Christian yearning to bring the Jews back to Israel and led directly to the establishment of the state.

In 1917, while Europe was embroiled in World War I, Palestine became a battleground of great strategic importance. British-led forces in the south had already been repelled twice. Turkish and German forces formed a reinforced line of defense stretching from Gaza to Beersheba. On October 31, both sides braced for what they knew would be the decisive battle for Beersheba, the key to the Negev. The seminal battle over the southern city would determine who controlled the Holy Land.

After a three-day trek through the desert, 800 Australians from the 4th Light Horse Brigade mounted their horses as the sun rose on October 31. They had crossed the desert without water, as the only water available belonged to the Germans and Turks who held the city.

Normally they would have approached on horseback and dismounted for an infantry charge with rifles blazing. At the last minute, General William Grant, the commander of the forces, decided on a mounted attack with bayonets, their rifles slung across their backs. They faced a firmly entrenched German force with automatic weapons and artillery. Inside the fortified city, 1,000 Turkish riflemen, nine machine guns and two aircraft awaited the Australian attack.

Stan Goodenough, an Evangelical Christian, came to Israel from South Africa in 1991 as a journalist but became an ardent Zionist and stayed in the Holy Land. Goodenough sees this turning point in history as the culmination of a long process of Christian desire to return Jews to the Holy Land.

“The land was not free under Islam. As Christians see it, it was Hashem (God) that led the allied victory against the Turks, and an essential part of that happening was the Australian cavalry charge,” Goodenough told Breaking Israel News. “In October the British captured Beersheba and in December, General [Edmund] Allenby entered Jerusalem. It is incredibly poignant that while the battle in Beersheba was taking place, the final draft of the Balfour Declaration was being written in England.”

He explained to Breaking Israel News that despite the tragic history between Judaism and Christianity, epitomized by the Holocaust, he also sees an underlying historical narrative that tells a story of Christians working to bring Jews to Israel.

“Already in the 18th century, Restorationism had taken root in British Christianity. By the time Herzl came along, there was already a strong Christian movement that had prepared the way, influencing the British politicians who were very religious men. Christian preachers in the British Empire were telling their congregations Hashem was going to bring the Jews back to Israel and Christians were going to play a big part in it,” Goodenough explained. “It was out of this that the Balfour Declaration grew.”

Goodenough quoted Israeli Prime Minister Benjamin Netanyahu, saying, “‘If it wasn’t for Christian Zionism, there would be no Jewish Zionism’.” He added, “For Christian Zionists like me, the redemption… is tied to the rebirth of your national homeland. The gentiles are supposed to go ahead of the Jews, and carry them in our arms and shoulders.”

Thus saith the Lord GOD: Behold, I will lift up My hand to the nations, and set up Mine ensign to the peoples, and they shall bring thy sons in their bosom, and thy daughters shall be carried upon their shoulders. Isaiah 49:22

“In the war, the soldiers may not have been religious, but bringing the Jews back to Israel was a small but influential stream in the Church and I am sure that was in their consciousness when they came to fight in Palestine,” Goodenough told Breaking Israel News.

“One hundred years ago, Australia was a very religious country, much more so than today. I am conjecturing, but I feel sure that many of the Australian soldiers knew they were fighting for the Jewish homeland.”