The Temple Has “Reappeared” – You Won’t Believe How [PHOTOS]

Home » The Temple Has “Reappeared” – You Won’t Believe How [PHOTOS] 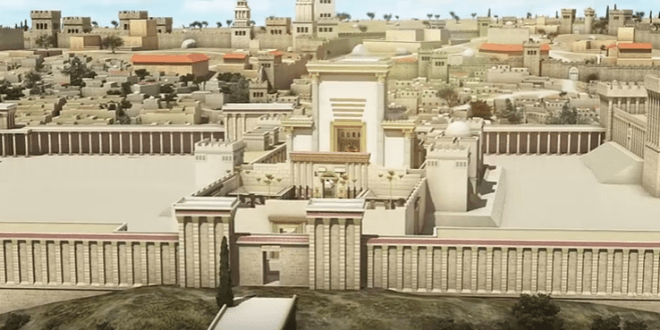 Last week, some visitors to the Western Wall (Kotel) in Jerusalem reported that they had seen the Second Temple reappear, and though the Messiah hasn’t yet arrived, the reports were indeed accurate. A new project from The Temple Mount Heritage Foundation and ArchTour is perhaps the closest you can get to experiencing the Temple, at least until it is really built.

The newly unveiled project uses virtual reality, a new technology used mainly for gaming and entertainment, in a way its innovators probably did not anticipate: immersing the user in a religious journey. The participant sits while wearing a special set of virtual reality goggles, which put him into a three-dimensional depiction of the world of the Second Temple.

The tour begins in the open air shuk (market) in Jerusalem of approximately 2,000 years ago. It wanders by Robinson’s Arch and the Royal Stoa in the southwest corner in all their full glory, before passing in through the gates of the Temple. The virtual tour brings “visitors” through the Temple courtyards, past the altar, into the midst of the priests and their daily activity.

The tour ends inside the Temple, where the visitor can see the menorah, the seven branched lamp, and the rack that held the show breads. Though animal sacrifices are not shown, the High Priest is seen performing the ketoret, the daily service in which the incense composed of 11 spices was burned on the small ‘Gold Altar’.

And Aharon shall burn thereon incense of sweet spices; every morning, when he dresseth the lamps, he shall burn it. Exodus 30:7

“In order to arrive at the necessary level of accuracy required for the project, we had to consult with archaeologists and rabbinic experts,” Tal Koewyn, the public relations coordinator for the project, explained to Breaking Israel News. “Experts on the art and craftsmanship of the period advised us on the details of how it actually looked.  This level of accuracy in visualizing the details of the Temple is really unprecedented.

“It is an all-inclusive experience. During your visit to the Kotel, you can see exactly how the Temple was situated relative to the present location. At the same time, you can see the actual service, down to the tiniest details.”

Creating this project was no simple task. It entailed bringing together cutting edge technology with esoteric learning, history, and live actors. Matanel Libi, the CEO, began the project five years ago, driven by a desire to create a way for people to see the Temple in all its glory.

Though there were many projects that helped to envision the Temple – paintings, videos, three dimensional models, and actual dioramas – Libi wanted an approach that would bring all the separate parts together, allowing the participant to completely experience the entire Temple Mount as it was in the days of the Second Temple.

Eliyasaf Libi, the producer, brought together actors for a biblical epic performed on a computer-generated set. “It was a special project on many levels,” Libi told Breaking Israel News. “It was a big technical challenge, requiring a high degree of historical accuracy while working with virtual imaging.  It just so happened that the actors, who had to be technically proficient, were also very spiritual and a special collection of Jews.”

This strange blend of the old and the new was personified by Adam Propp, an Orthodox resident resident of Jerusalem who acted as a priest in the project. As a religious Jew and an actual descendant of the priestly class, he connected deeply to his role.

“I played a regular kohen (priest), and the acting affected me deeply,” he told Breaking Israel News, explaining how the acting was done on green screen, a cinematic technique in which the actors are filmed in front of a green backdrop and the set background is added in post-production.

“When we were doing the Temple service, we were really saying the service, including the blessings, as it was in the Temple. All of the actions were accurate, what the kohanim really did in the Temple. It wasn’t just reading lines. When we did the priestly blessing, we stood on stairs, like in the Temple, and called out the blessings. It was a powerful experience for me, and I hope it is for the people who watch.”

The virtual reality tour is adjacent to the Kotel Plaza, open to visitors without a reservation.