Christian Volunteers Harvest Grapes in Samaria in Fulfillment of Jeremiah 31:4 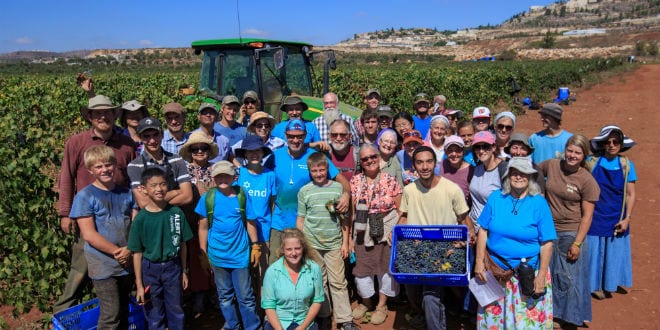 In the vineyards of Shiloh, Ofra, Psagot and Har Bracha, a group of about 100 Christian volunteers from the USA, Canada, and other parts of the world, were on hand to assist Israeli farmers with the grape harvest this week. The group was part of HaYovel, a U.S. based non-profit that recruits volunteers to help independent Israeli farmers.

Paul Docherty, a 58-year-old construction worker from Seattle, Washington told Tazpit Press Service (TPS) that this was his fourth volunteer mission. “I love coming out here to the vineyards of Shiloh to prune the grapes and help out the farmers living here,” he said.

Docherty, like all the volunteers, are spending about three weeks in Israel and cover the costs of the trip on their own.

“Seeing the gratitude of the farmers, and connecting with the settlers, is something I look forward to each year,” noted Docherty. “I read the Bible, and just being able to visit Shiloh is a special experience in itself.

“I’m not such a bad pruner either,” he added.

Indeed, the HaYovel grape harvesters are serious workers. According to Caleb Waller, the volunteers harvest on average about 20 tons of grapes a day.

HaYovel was founded by Tommy and Sherri Waller, who have been bringing volunteer groups to Israel since founding the organization in 2005. The Wallers have 11 children, all of whom are active in HaYovel in a variety of capacities, from harvesting and field logistics to PR and lecture presentations about Israel and their organization’s work.

“Our mission is to help Israeli farmers anyway we can. We show them that they are not alone,” Tommy Waller told TPS. The 55-year-old grandfather was raised in a Southern Baptist home in Tennessee, where he and wife raised their family, homeschooling their children. Waller, who worked for Fed Ex for 13 years, left the corporate world and moved his family to an Amish community where they ran a successful organic family farm. Today they draw on their vast agricultural experience to benefit Israeli vineyards and farms.

“Life has been a spiritual journey,” he explained. “Some people might call it radical.”

Waller made his first trip to Israel in 2004 and met an Israeli farmer, Nir Lavie, in Har Bracha. Lavie quoted the Biblical prophet Jeremiah, “Again you will plant vineyards on the hills of Samaria,” and Waller was swept away.

“It felt like I was touching the words of the Bible for the first time,” said Waller.

“I wanted to help Nir out and asked him how we could help – he told me he needed workers and a year later HaYovel was born.”

Headquartered in Har Bracha, HaYovel has the backing of the community rabbi, Rabbi Eliezer Melamed, although not all farmers in Judea and Samaria accept the help of the Christian volunteers.

Waller emphasizes that they are not missionaries. “This isn’t about converting, but showing our respect and standing with the Jewish people in their biblical heartland. We’ve had thousands of volunteers from all over the world come as well as delegations of Congressmen and senators. They see a different kind of reality in Judea and Samaria – a peaceful one,” he said.

The volunteers tend to agree. In the Shiloh vineyards, one can hear them singing as they work against the backdrop of the rocky Samarian mountains.  “We’re excited to be here,” said Paul Docherty’s sister, Jane. “I knew I wanted to do this when I heard Caleb Waller and his brother, come to speak to our congregation. We’re participating in history.”

For Shiloh vineyard owner, Ira Rappaport, the volunteers provide a vital service. “I’ve never seen anyone handpick grapes as fast they do. Their work is amazing,” he told TPS.