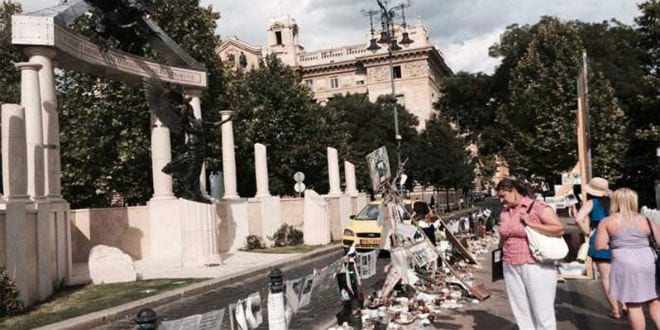 The Living Memorial, a monument in Budapest’s Liberty Square, was vandalized over the weekend, after a call by the neo-Nazi website Kuruc.info to destroy it, the website Hungarian Free Press reported Sunday. The Living Memorial was erected back in 2014 in protest against the monument to the German occupation erected by the government, which deflects Hungary’s responsibility for the Holocaust and pins it solely on the Germans.

An estimated 600,000 Hungarian Jews perished in the Holocaust.

For more than two years, the Living Memorial has served as a site for regular talks, lectures, discussion groups, musical performances and commemorations.

One Alitea Guzmán wrote on Kuruc.info: “I promise that one night, in the beginning of September, I will walk by the Living Memorial and I will pack up four or five kilograms of  the display, which legally is considered to be garbage, into a strong bag. And putting that into my car, I will take it to where it belongs. Naturally, I won’t dump it into the Danube, because that is already very polluted.”

Now, as promise, hundreds of photographs which were on display at the site have been torn up and other memorabilia items which had been added to the Living Memorial by survivors and descendants of survivors have been destroyed or stolen.

The Living Memorial group issued a statement saying, “With the exception of a few smaller incidents, respect towards the victims of the Holocaust always protected the memorial from the worst attacks. But yesterday something happened, which until now nobody dared to commit.”

According to the Hungarian Free Press, the Living Memorial group filed a police report immediately after the attack on the monument. The activists noted that Liberty Square is well-equipped with CCTV cameras, so police should be able to identify the perpetrators. But they also revealed that they “do not expect any meaningful response from the state.”