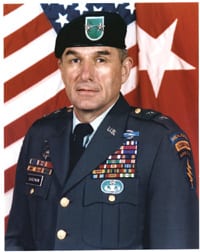 A group of 88 U.S. military generals, including the only Holocaust survivor to become an American general, signed an open letter supporting Donald J. Trump for president on Tuesday.

The letter, which includes four four-star and 14 three-star flag officers, was organized by Major Gen. Sidney Shachnow and Rear Admiral Charles Williams. The two major issues that spurred the letter are opposition to the temperament accusation and national security.

“The beating that Trump is taking [by Hillary Clinton’s campaign] that he doesn’t have the temperament to be the commander-in-chief is erroneous,” Williams told JNS.org. “We wanted to get this out right now.”

Shachnow, a 40-year Army veteran, escaped a Lithuanian concentration camp before joining the US military . He served as a Green Beret, was Commanding General of the U.S. Army Special Forces Command Airborne at Ft. Bragg. He’s the recipient of the Distinguished Service Medal.

Williams served as Commanding Officer of five organizations throughout his career and received the Legion of Merit.

Williams’ colleagues, who have advised Trump privately, say the billionaire businessman listens 90 percent of the time and asks questions 10 percent. “He grasps the concept then moves onto the next issue, which is what a CEO and leader does,” Williams said.

For many in the military community, national security is the biggest concern and in conversations with numerous peers, Williams said many were willing, and continue to be willing, to sign their names to the open letter supporting Trump.

So far, Williams contacted 170 out of over 3,000 living retired admirals and generals. While nearly 90 people have agreed to sign onto the letter so far, Williams said others told him they will vote for Trump but didn’t want to sign a public statement. Few expressed criticism of the letter, he said.

The group may do a second announcement after reaching out to more in the military community, Williams added. Tuesday’s letter is ahead of the Sept. 7 event where Clinton and Trump will appear in a first-ever “Commander-in-Chief Forum,” hosted by the Iraq and Afghanistan Veterans of America in New York City. It will feature questions from NBC News and an audience made up of mostly military veterans and active service members.