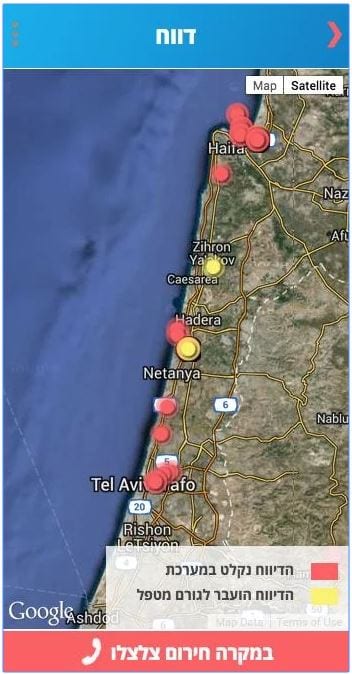 Every year, more than 100,000 endangered marine animals, including sharks and rays, are illegally fished in Israel.  Additionally, an average of four dolphins and 3,000 sea turtles are harmed annually as a result of fishing activity.  Coupled with years of overfishing, these same destructive fishing methods are also driving Israel’s local fish population to the verge of extinction.

While surfers, swimmers, fishermen and nature lovers are eager to file reports about hazards and illegal activity witnessed on Israeli beaches, there was no structured and effective way of collecting their reports and distributing the information to the proper authorities to take action in real-time.  That is, until last fall.

In an effort to reverse these trends, the Society for the Protection of Nature in Israel (SPNI) developed Sea Watch, an app that empowers the public to improve the ecological state of Israel’s oceans and rivers by sending real-time reports on a variety of maritime environmental incidents and hazards straight to SPNI.

Since its launch in November, the free app has been downloaded over 5,000 times and has made a profound impact on Israel’s marine life, serving as a one-stop reporting hub for all issues relating to ocean pollution, the sale of endangered species, illegal fishing, injured mammal or sea turtles, abandoned netting, invasive species, and uncontrolled sewage.

“The reports are collected by an SPNI team that verifies the information and alerts the authority assigned to each case, whether that be the Israel Nature and Parks Authority, the Ministry of Environment Protection, the fishing department at the Ministry of Agriculture, or the local municipality,” explains Rotem Trivizki, SPNI’s Sea Watch Coordinator.  “Some of the reports are even handled directly by SPNI experts with the help of volunteers.”

The user-friendly app features a real-time reporting map that highlights the locations of all reports received and allows users to share pictures of the hazards they discover.  While SPNI staffers handle all reports sent via the app, users are also given the option of making an emergency phone call, which is fielded by a dedicated team at the “Call Yachol” call center, a one-of-a-kind social enterprise that trains and employs individuals with physical, emotional, and sensory disabilities.

“Our Call Yachol first responders are an incredibly impressive group of conscientious and committed men and women.  We are thrilled to be providing them with not just gainful employment but truly meaningful work, and we are so proud that there is now a social justice element to our environmental mission,” said Trivizki.

In the last 10 months, Sea Watch and its behind-the-scenes team have made tremendous contributions to Israel’s conservation efforts.  Just weeks after the app was made available to the public, it was instrumental in thwarting illegal fishing activities in Haifa.

During a visit to the Shavit Fisherman Anchorage in Haifa, a group from SPNI’s Hof Hacarmel Field School uncovered a deep sea fishing boat filled with crates of protected round stingrays.  Upon discovering the illegal haul, they used the app to report the incident.  Rangers from the Israel Nature and Parks Authority were immediately dispatched to handle the situation.

More recently, the app has helped save the lives of injured sea turtles.  In one instance, a group of surfers found a baby sea turtle washed up on the beach with a “ghost” fishing net around its neck.  Not long after they alerted SPNI of the situation via Sea Watch, a ranger from the Israel Nature and Parks Authority arrived and whisked the turtle away to the Israel Sea Turtle Rescue and Rehabilitation Center.  Lovingly named “Michelangelo” by its rescuers, the baby sea turtle is almost fully recovered and is scheduled for return to the wild in the coming weeks.

Trivizki notes that SPNI keeps track of every alert and how they were treated by the different authorities, with the goal of issuing an annual follow-up report on the efficiency of each authority in responding in a timely manner, removing hazards, and enforcing the relevant laws.

“The successes we’ve had thanks to Sea Watch are all perfect examples of how the public can truly influence nature conservation.  The more people use the app, the more effective we can be at every level in improving the ecology of Israel’s oceans and rivers.”

Sea Watch is compatible with all iOS and Android devices and is available as a free download via the App Store and Google Play.