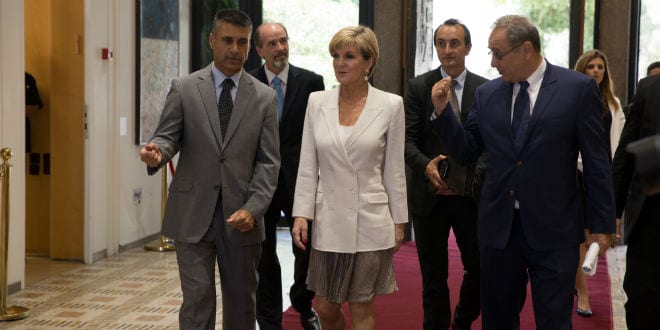 Australian Foreign Minister Julie Bishop arrived in Jerusalem on Sunday for a three-day state visit to Israel. In her first round of meetings with Israel’s prime minister, president, and defense minister, Bishop stressed Australia’s continued commitment to the State of Israel.

“I want to take this opportunity to reaffirm our absolute enduring commitment to the State of Israel and our friendship,” Foreign Minister Bishop told Prime Minister Benjamin Netanyahu.

The current Australian government under Prime Minister Malcolm Turnbull was inaugurated in July, 2016 and is considered very friendly to Israel. Foreign Minister Bishop publicly stated two years ago that the international community has no place to decide which Jewish communities in Judea and Samaria are legal and which ones are not.

“The Australian government is one of the most pro-Israel governments there has been and continues to be,” Isi Leibler, a former leader of the Australian Jewish community and a Jerusalem Post columnist told Tazpit Press Service (TPS). “There will be no threat to Israeli-Australian relations as a whole as long as this government stays is power.”

In a joint press conference with President Reuven Rivlin, Bishop said the trip is an opportunity for her to ensure that the relationship between Australia and Israel is not taken for granted. “It will continue to be nurtured by both sides and it will continue to flourish based on common values,” she said.

Following Bishop’s meeting with Netanyahu and Rivlin, she continued to hold a private meeting with Defense Minister Liberman. According to an Israeli Foreign Ministry spokesperson, the two ministers discussed further bilateral cooperation in various fields behind closed doors.

“Foreign Minister Liberman thanked Foreign Minister Bishop for the part Australian soldiers play in the United Nations’ observer forces in the Sinai Peninsula and the Golan Heights. The two ministers met several times in the past during Liberman’s tenure as foreign minister and they have a good existing relationship, which continues today,” said Tzachi Moshe, a spokesman for Liberman.

In the next two days, Bishop will visit Tel Aviv to inspect several high-tech innovation hubs including “Landing Pad,” which is helping Australian entrepreneurs tap into Israel’s science and research industry. She is also scheduled to visit Ramallah and meet with the leaders of the Palestinian Authority.

“I hope she will tell the Palestinians that Australia will remain behind Israel and also that they should endeavor to get their act together for any potential negotiating future,” Isi Leibler told TPS.