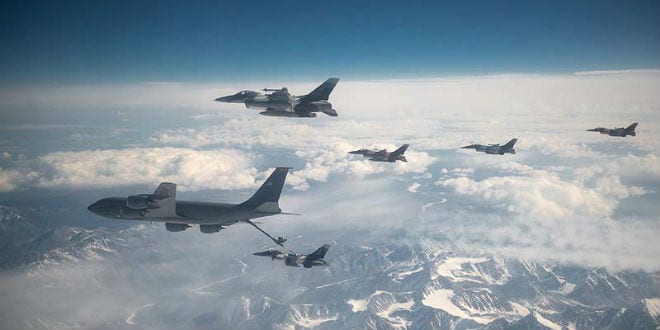 Israel Air Force pilots last week trained for the first time with pilots from the Pakistani and United Arab Emirates air forces, as part of the “Red Flag” exercises in Nevada, Israel’s Channel 2 News reported Thursday. The teams from the two countries that do not have diplomatic relations with Israel nevertheless trained and cooperated with the Israeli team during the exercises. The Red Flag exercises also included pilots from the US and Spain and featured dozens of attack sorties, dogfights, bombings, and long-range flight midair refueling.

The report noted that the fact that the Pakistani and UAE teams did not object to flying alongside their Israeli counterparts suggests that they were more interested in studying and exercising than in politics. The lists of participating teams is composed solely by the Pentagon, and participating countries cannot modify it — but they can refuse to participate.

A senior IAF official told Chanel 2 News that “the Americans are excellent pilots, it’s clear they know how to fly and fight.” He said the Americans downed Israeli planes in dogfights, “but we downed them, too.” Each sortie involved many dozens of fighter planes, as well as refueling and intelligence support aircraft, and took place in day and night-time conditions, testing the teams’ ability to work together.

But the official noted that “this is not just about flying together, but about preparing for the mission ahead of time. You see right away who’s good and who’s not. There’s no place to hide. Everything stands out. We got better all the time, and the real deal was to learn from our mistakes.”

The exercise included IAF F-16I “Sufa” (Heb: Storm) aircraft, and for the first time Boeing 707 refueling aircraft. “It’s the nearest exercise to real warfare you can have,” the official said, “dealing with enemy planes, anti-aircraft missile threats—including the S300 systems Iran has—and cyber attacks on our aircraft. We still need to explore our performance, but the pilots are saying it was good.”

Next year, Israel will host the “Blue Flag” exercises, with the air forces of the US, France and Poland.