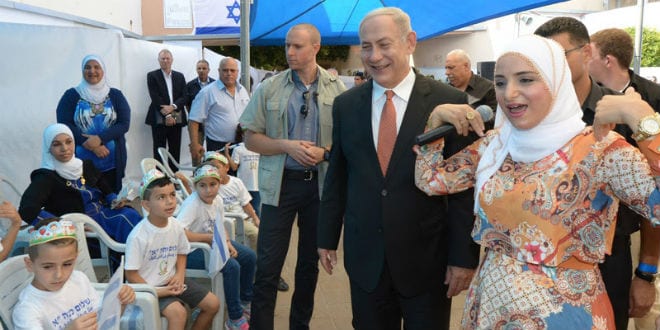 September 1 marks the first day of school every year for over 2 million Israeli children. On Thursday, Prime Minister Benjamin Netanyahu opened the school year with a visit to a public elementary school in Israel’s north.

Tamra Haemek has both Jewish and Arab students and teachers. The 200 pupils welcomed Netanyahu and Education Minister Naftali Bennett with a festive ceremony in Hebrew, Arabic and English.

Reminiscing about his school days, Netanyahu told the students to learn and “be good children”. In his speech, he emphasized coexistence and, at the same time, the importance of learning Jewish history.

He continued, “I want you to be doctors, scientists and writers, and be whatever you want to – and are able to – be. I want you to be loyal citizens, integrated into the State of Israel; this is your state.”

The Prime Minister unconsciously echoed the Book of Proverbs when he instructed the students to listen to their parents and their teachers.

“Learn well. Go back home and do what mother and father tell you,” he told them.

On Tuesday, Netanyahu made an address to Israel’s students at large, exhorting them to learn the Bible in order to understand “why we are here” in Israel.

“First of all the study of the Bible. We must make a major effort, this is the basis for why we are here, why we have returned here, why we stay here,” he stated.