Biblical Tabernacle is Nothing Like What You Think, Says Bible-Savvy Engineer [PHOTOS]

Home » Biblical Tabernacle is Nothing Like What You Think, Says Bible-Savvy Engineer [PHOTOS] 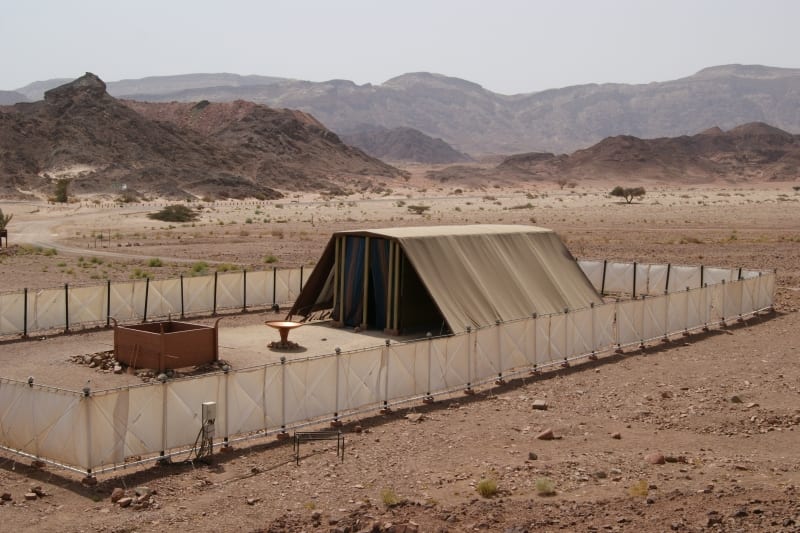 The Biblical Tabernacle, or Tent of Meeting, may have been not a modest rectangular tent as scholars have believed for centuries, but an enormous circular structure six stories tall, proposes a Wisconsin engineer who has spent years studying the intricacies of the Biblical texts describing the desert structure.

Andrew Hoy, a trained mechanical engineer from Milwaukee currently in Israel to investigate his theory, has developed a concept which challenges every known belief about the portable central structure Israel used to served God for 400 years until the First Temple was built.

Hoy has a head for numbers and a passion for the Bible. Raised in the Lutheran Church, his personal journey led him to leave that church. He studied in yeshiva (religious seminary) in Jerusalem for a period, where he concentrated on learning Hebrew in order to study the Bible in its original form.

When Hoy read the sections in Exodus dealing with the construction of the Tabernacle, listing in detail the materials used, it raised many questions for him. He was familiar with the full-scale models of the Tabernacle at Timna Park and Ariel in Israel, and realized that there were many discrepancies between these examples and the Biblical text.

Most scholarly theories describing the Tabernacle as a rectangular tent. The 11 sheets described in the Bible, each measuring four cubits by 30, were attached to each other, with loops on opposite edges. Using the loops to attach the sheets, the Bible instructs to join all sheets together into a single sheet, and to fold the eleventh sheet back over upon itself.

It is traditionally assumed that these curtains are joined together in a top-to-bottom arrangement to make one large rectangular sheet that becomes a rectangular tent. This rendition, however, fails to comply with the exact Exodus specifications, which offers no provisions for unjoined edges, and describes all sheets as having loop joints on both edges.

And as for the overhanging part that remaineth of the curtains of the tent, the half curtain that remaineth over shall hang over the back of the Tabernacle. Exodus 26:12

Hoy’s ‘eureka’ moment came when he realized that the final length arranged to enclose a circle would give a circumference of 314 cubits, which is a near perfect multiple of the mathematical constant known as PI or π. The dimensions for the courtyard created by this circular arrangement conform perfectly to the Biblical description of  being exactly 100 cubits “long” (i.e., in diameter), with the north and south portions each measuring 50 cubits “wide” (i.e., radius). The Tabernacle enclosed, constructed in a similar manner, became a decagon.

“Who makes a tent that is four layers thick in the desert, with walls made out of beams two feet thick?” Hoy asked rhetorically. “The rectangular version uses a lot of material they just don’t have permission in the Bible to use,” he explained to Breaking Israel News.

He was also perplexed by the methods most scholarly works described for construction of the walls for the courtyard, describing walls made of solid timber connected by rods.

“It’s cumbersome, and uses a lot more wood than listed in the Bible. The biggest problem comes in using silver as a base for the timbers,” Hoy noted. “They were permitted 100 talents of silver, weighing a total of four tons. Making the bases out of silver would require many more tons of silver that were just not accounted for in the Bible. As an engineer, I understood the silver and brass as being used for struts, as part of a dome’s structure.”

Hoy envisioned a circle of linen and wool sheets capped by a huge leather enclosure. Using his engineering skills and adhering to the exact quantities of wood and silver specified in the Bible, he designed a tent similar to the traditional yurts used in Mongolia. Hoy’s version, based on the Bible’s technical instructions, is an astounding six stories tall.

Hoy has created a complete set of plans for the circular Tabernacle on design software, down to the tiniest hardware, in the hopes of creating a scale model based on his circular concept. He has spent hundreds of hours checking his theory from an engineering perspective and also for Biblical adherence.

There are many practical reasons Hoy believes in a circular Tabernacle.

“Practically, a yurt stands up better to high winds than a square tent,” Hoy stated. “It makes more sense to order the tribes in a circular camp than in rectangles with gaps in the corners. Also, the Tabernacle impressed the other nations. A six story tall dome would certainly do that.”

His trip to Israel has two purposes: to investigate archaeological clues to substantiate his theory of a circular Tabernacle and to gain support for it. The Tabernacle accompanied the Jews wandering in the desert, but stood in Shiloh for over 300 years. As a theoretically portable structure dismantled 3,000 years ago, the first goal is improbable at best.

His second goal is proving even more difficult, since one look at his architectural designs challenges Biblical scholars to reconsider so much of what they thought about the Tabernacle and the socio-political aspects of Israel connected to it.

“I think that restoration of personal study is really important, to look at the text for yourself with a critical eye,” Hoy told Breaking Israel News. “I wasn’t looking for this, but when I began to study the verses about the Tabernacle, this is what became clear to me as being the absolute truth.”