For First Time in Decade, Jews Will Build in Hebron Once More

Home » For First Time in Decade, Jews Will Build in Hebron Once More 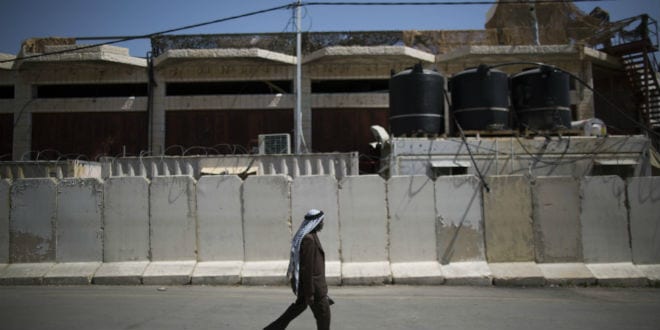 Cave of the Patriarchs COGAT Hebron Judea and Samaria Terrorism

Israel is set to begin construction on new buildings for the Jewish community of Hebron for the first time in a decade, Haaretz reported on Monday.

Hebron’s Jewish population is small, and confined to the ancient city’s H2 area, which is under full Israeli control. Earlier in the year, the Defense Ministry officially issued a planning permit for a parcel of land now under military control, approving the building of several housing units in H2.

Currently, the land lies in the Mitkanim military outpost in the area. According to security forces and local residents, it has rightfully belonged to Jews since before the establishment of the state of Israel in 1948.

“The land has always been known to belong to the Jewish community,” said a spokesman for Hebron settlers, Noam Arnon, Haaretz reported. “If they live there again, I’m sure every justice-loving person will rejoice.”

The Jewish enclave in Hebron, one of Israel’s four holy cities, has not expanded since the early 2000s. The planned growth will likely be small, with only a few housing units. Planning is still in the early stages, though a special team is working on the project.

Several hundred Jews live in Hebron itself, with a larger community located in nearby Kiryat Arba. The ancient city is host to the Cave of the Patriarchs, the Biblical burial place of Abraham, Sarah, Isaac, Rebecca, Jacob, and Leah.

In recent months, Hebron, located in the hills of Judea, has become a flashpoint for terrorist violence, with dozens of Jewish victims stabbed, shot and even killed in the area by local Arabs from Hebron and surrounding villages. Most recently, 13-year-old Hallel Ariel was killed in Kiryat Arba when a terrorist broke into her home and stabbed her to death in her bed.

Recently, Israel’s cabinet signaled its intention to step up protection of these areas, approving 50 million shekels for improving the security of Jewish communities in Hebron and Kiryat Arba.