“Thy Children Shall Return to Their Borders”: Nefesh B’Nefesh Welcomes 223 New Immigrants from US [PHOTOS]

Home » “Thy Children Shall Return to Their Borders”: Nefesh B’Nefesh Welcomes 223 New Immigrants from US [PHOTOS] 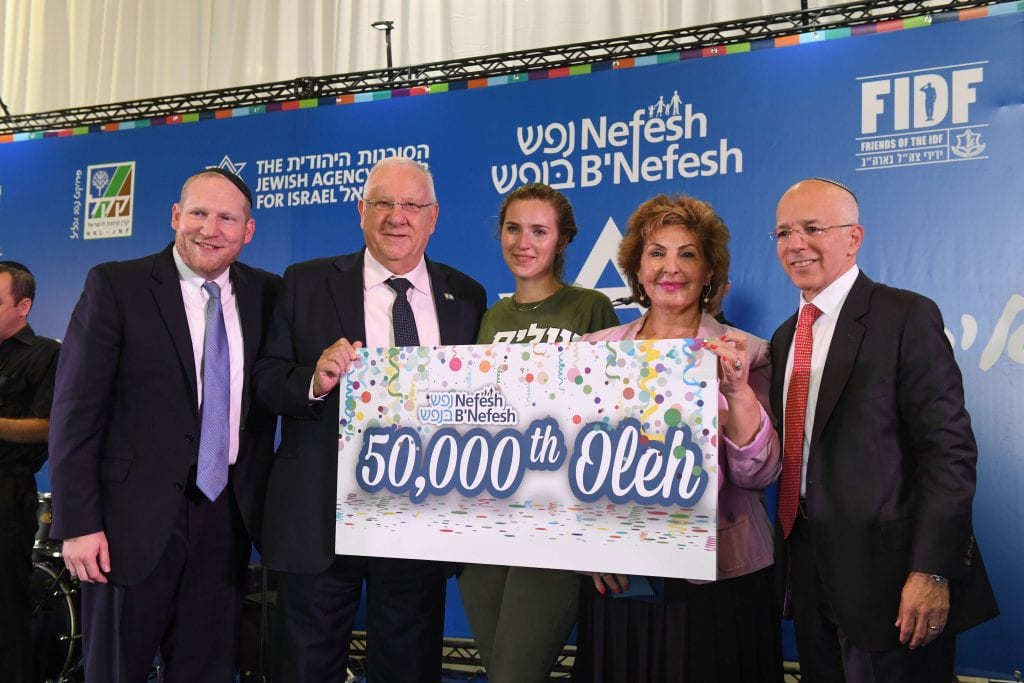 During a low point in Jerusalem’s long history, when the Children of Israel were forced into exile following the destruction of the Temple, the prophet Jeremiah promised that one day the “children would return to the borders” of Israel. This stunning prophecy was fulfilled on Wednesday as a group of 233 olim (new immigrants) landed in Tel Aviv on the wings of an El Al Boeing 777 and were met by an enormous celebration.

On this flight, Nefesh B’Nefesh, the organization that helps North American Jews immigrate to Israel, celebrated a significant milestone: the aliyah (immigration) of its 50,000th newcomer. Rebecca Glanzer, 22, from Brooklyn, NY, graduated recently from Columbia University with a degree in economics and is hoping to serve in the IDF’s Artillery Brigade.

“I have been looking forward to making aliyah and serving as a lone soldier in the IDF for so many years, and it is so crazy to me that this dream I had in high school is finally being realized,” said Glanzer.

Rabbi Tuly Weisz, founder of Israel365 and publisher of Breaking Israel News, was at the airport to welcome the olim and present gift bags, courtesy of donations from Israel365 readers, to new immigrants. The bags included mezuzahs for their new homes in Israel, copies of The Israel Bible and envelopes of Israeli shekels to get them started.

The Israel365 Aliyah Campaign was started to make the process of immigrating to Israel a bit easier for the new arrivals. “While making aliyah fulfills personal dreams and the realization of Biblical prophecies, it comes with hardships and challenges,” Rabbi Weisz explained.

“Individuals and families experience emotional, physical and financial strains as they struggle to learn a new language, find a job, deal with the bureaucracies of a new country and grasp the nuances of a foreign culture. We hope that our gift will help these inspiring olim get started in their new homes.”

Upon being presented with a gift bag, Glanzer, the 50,000th Nefesh b’Nefesh oleh, said, “I want to thank all the Jews and non-Jews who made this day so special.”

Of the 75 soon-to-be IDF soldiers who came on the flight, over half are young women. The flight’s additional passengers include a diverse mix of people from 22 US states and one Canadian province, including 24 families, 78 children and 10 medical professionals. The ages of the immigrants range from 3.5 weeks to 85 years old.

Elissa and Yonatan Freedman arrived with their three children, Hillel (11 months), Lior (4) and Matan (3) from Connecticut. Upon seeing the new mezuzah presented by Israel365, Yonatan remarked, “Last night when I took off my mezuzot in West Hartford, I felt like they were jumping off the doorpost as if to say, we have been here long enough – take us to Israel! And now we have a new mezuzah to put on our door in Beersheva, the same city where Abraham pitched his tent!”

The crowd was addressed by the President of Israel Reuven Rivlin. “This is such an honor for me to join you at this special moment. The moment you have all come home. You are no longer Jews in exile, you are now all Israelis. Each of you, young and old, men and women, have fulfilled the dream of 2000 years, you have made aliyah,” said Rivlin at the ceremony.

Amongst the immigrants were a number of recent college graduates who hope to use their college education to help their new country. Jordan Katrinsky, 22, originally from Denver, Colorado just graduated Dartmouth College in June and will be living on a kibbutz 5 kilometers from the Gaza border.

“People say that Israel isn’t perfect, but after 2,000 years of waiting for it, am I going to tell God that I am going to wait till it’s perfect? I am going to help make it perfect!” exclaimed Katrisnsky with excitement.

“The State of Israel salutes the young people who chose to leave their comfortable lives in North America in order to make the greatest contribution to the country’s national security and its people,” said Minister of Aliyah and Immigrant Absorption Sofa Landver at the welcoming ceremony.

Jacob Rosh Gadol from Baltimore, Maryland just graduated the University of Maryland with a degree in Mechanical Engineering and will be joining the IDF Rapat Unit of Tank Design, “so that I can put my college education to use in defending my people,” Rosh Gadol told Rabbi Weisz.

Israel365 and Breaking Israel News wish all of these new immigrants much success as they begin their new life in Israel.