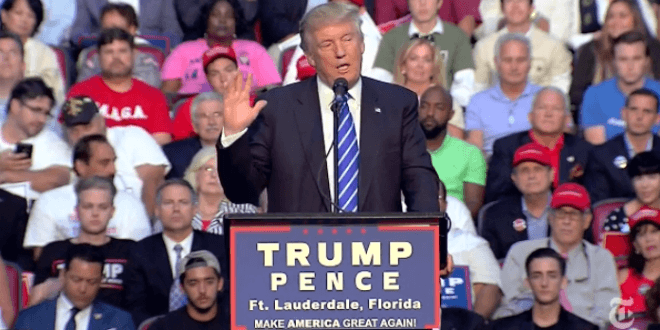 President Barack Obama founded ISIS, said GOP presidential nominee Donald Trump at a Wednesday rally, continuing an escalation of rhetoric that yesterday saw him fielding criticism for hinting at an assassination of Democratic rival Hillary Clinton. He further suggested in his speech that Clinton was Obama’s ISIS co-creator.

“In many respects, you know, they honor President Obama. ISIS is honoring President Obama,” Trump declared during a campaign rally in Sunrise, Florida. “He’s the founder! He founded ISIS,” he said to cheers from the crowd.

“And, I would say the co-founder would be crooked Hillary Clinton.”

He argued that Obama and Clinton’s political and diplomatic mistakes in the Middle East had laid the ground for the rise of the Islamic State.

“Instead of allowing some small forces behind to maybe, just maybe, keep it under control, we pulled it out,” Trump said. “Then Obama came in, and normally you want to clean up and he made a bigger mess. We’re not respected. We’re laughed at all over the world.”

In the same speech, he referred to the president by his full name, Barack Hussein Obama, a habit which recalled Trump’s previous questioning of Obama’s birthplace and religion.

Obama is the latest in the line of Trump’s opponents whom he has recently blamed for the creation of ISIS. Last week, he said that former Secretary of State Clinton’s weak policies were at the root of the birth of the terror organization and suggested she should “get a reward” for her role in its founding.

A few days later, he said that a group of 50 national security officials who had signed an open letter condemning Trump and calling him “unqualified for the presidency” shared the blame.

“The names on this letter are the ones the American people should look to for answers on why the world is a mess,” Trump responded in a statement. “These insiders – along with Hillary Clinton – . . . are the ones who allowed the rise of ISIS.”