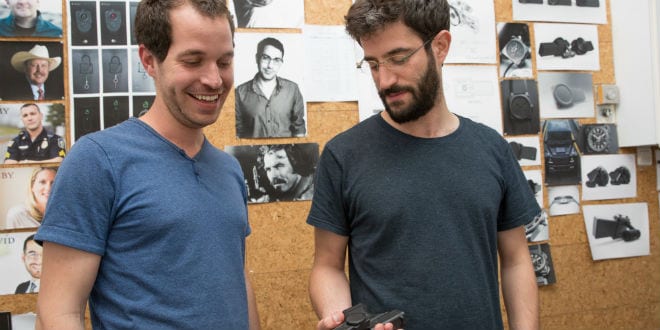 Jerusalem-based startup Zore has developed a unique lock for weapons that would prevent them from being used by any unauthorized personnel. The founders of the company have already raised almost half a million dollars and argue that the product is more efficient and user-friendly than traditional weapon locks.

The Zore lock is a cartridge-shaped device that is attached to the weapon and alerts weapon owners on their smartphone of an attempt made to move or unlock their firearm. The device can be unlocked by turning it clockwise and counterclockwise according to a predetermined code sequence.

“Our product is unique,” Zore co-founder and CEO Yonatan Zimmerman told Tazpit Press Service (TPS). “It is quick, not over-complicated, and works reliably with all weapons. It even works in the dark; you don’t have to look at it.”

The Zore company is named after the Hebrew word for flint. The startup was founded in 2014 by Zimmerman, 30, a former Givati Brigade reconnaissance unit commander from Jerusalem, together with Yalon Fishbein, 28, from Kibbutz Afikim near the Sea of Galilee, who also served in an elite IDF unit specializing in explosive ordnance disposal.

Zimmerman said that the idea for the startup was formed in February, 2014 when IDF soldier Tal Nachman was killed by friendly fire. “It was such a stupid incident,” he lamented. “There was a headline the next day quoting the bereaved mother who asked how the army had still not found a technological solution. That woke me up.”

Zore launched an Indiegogo crowdfunding campaign in June and has raised over USD 420,000 to date in purchases of its weapon lock, a sum that is over 400% greater than the company’s original goal of USD 100,000 with 19 days left until the end of the campaign.

“We are flying to New York this week to meet with investors and supporters. We have received a lot of feedback and support in the United States,” Zore Vice President of Software Engineering Nir Gazit informed TPS. “There are some gun-rights activists who are very conservative and who usually oppose any changes to weapon safety, but we have supporters and lobbyists from across the board.”

Analysis by The Washington Post found that toddlers were finding guns and shooting people, mostly themselves, at a rate of about once a week in the United States during 2015. The pro-gun-control group Everytown for Gun Safety has found at least 146 instances in 2016 in which a child younger than 18 has accidentally shot someone.

“In contrast to popular perception, accidents involving weapons are not all due to lunatics,” Zimmerman explained. “Some nine percent of gun owners leave their weapons loaded and unlocked, which is the source of most of the accidents.”

Accidental shooting incidents by children in Israel are rare, but such an incident occurred in 2009 when 12-year-old Oren Mizrahi was accidentally shot and killed by his friend while playing with his father’s handgun.

“There are stricter gun-safety laws in Israel, such as a law that requires storing guns in a locked box,” said Zimmerman. “It’s a different world compared to the US, where there is a gun culture that does not exist in Israel. Weapons there are much more present and accessible.”

Many other “smart-gun” startups exist in Israel and around the world. Various solutions have been presented such as the Armatix iP1, which only works in proximity to a special device, or biometric fingerprint technology, which has been developed by other Israeli companies such as Clipfort.

Zimmerman, however, is critical of these options. “As a gun owner, I don’t want my gun having to think before it shoots. Those high-tech solutions become unreliable because your fingers must be clean and dry for them to work. And what if you are using gloves? It just doesn’t work, it’s not the right technology for this situation. Our goal is to bring the weapons industry into the 21st century without changing the weapon itself. People want the same old gun.”

“Advanced technology may sound cool, but, in my opinion, the best solution is the simplest one,” agreed Fishbein.

Jesse Lempel and Michael Zeff contributed to this article.