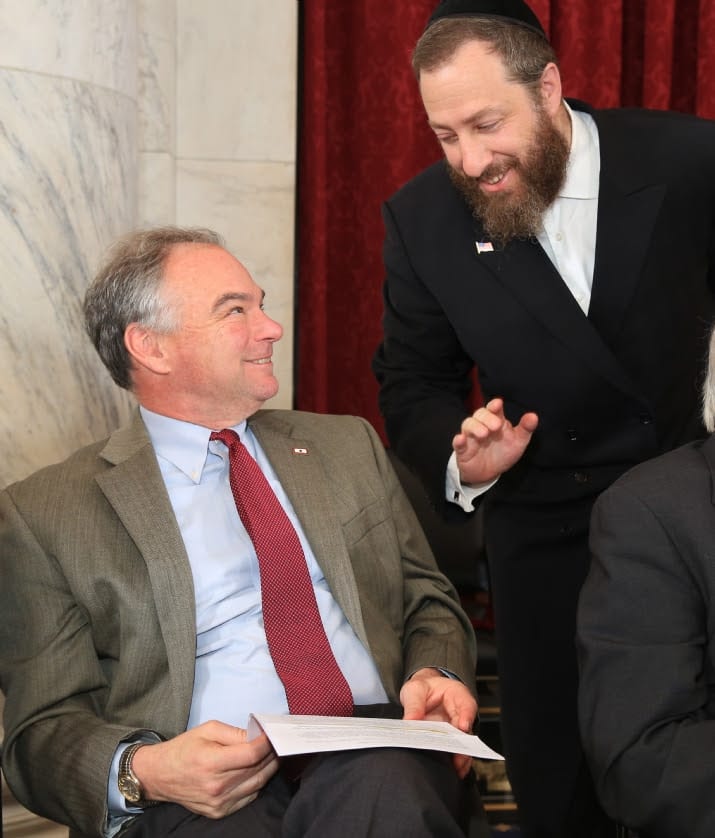 It didn’t take long after presumptive Democratic presidential nominee Hillary Clinton announced Tim Kaine as her running mate on Friday for Jewish groups and leaders to delve into the Virginia senator’s history with his state’s Jewish community and his stances on Israel, Benjamin Netanyahu, and the two-state solution.

While liberal Jewish site the Forward called Kaine the “Jewiest Vice President pick” and noted that he had been “a friend to the Jewish community for about as long as he’s been in public service”, conservatives pointed to Kaine’s criticism of Israeli Prime Minister Netanyahu and condemned his decision last year not to attend Netanyahu’s speech to Congress on the Iranian nuclear deal.

I’m thrilled to announce my running mate, @TimKaine, a man who’s devoted his life to fighting for others. -H pic.twitter.com/lTVyfztE5Z

A practicing Catholic and former missionary, Kaine joins the Senate’s weekly prayer breakfast on Wednesdays and is part of a “reflection group” in the Senate which discusses faith-related issues. In a speech given in May at the Jewish American Heritage Celebration in Washington, D.C., Kaine spoke at length on the importance of religious freedom, his trips to Israel, and his work in opening a huge Sabra hummus factory in his state.

Kaine differs from many Democrats in his support of defense for Israel, representing a break with the increasingly vitriolic left-wing narrative painting Israel as an oppressive apartheid state. (In fact, many former Bernie Sanders supporters have spoken against the choice of Kaine as the Democratic running mate.) He has said that he feels Netanyahu and the Israeli government are pushing Democrats away despite their pro-Israel stance.

“Our party has a long tradition of being pro-Israel, and being pro-Israel doesn’t mean we agree on everything, but we’re friends, we’re allies, we’re partners and to the extent we have disagreements we try to work them out productively,” he said last year.

“I want Israel to be safe and secure in the future and I worry that some of the activities vis-à-vis Palestine have weakened Israel’s future security, not strengthened it.”

In November, Kaine joined a number of Democratic policymakers who called on President Barack Obama to write a strengthened “Memorandum of Understanding” on security assistance to Israel.

He has visited Israel a number of times, most recently in January, when he and a delegation of Democratic senators met with Netanyahu to discuss oversight of the Iran deal.

J Street, the influential left-wing Jewish lobby decried by many as hostile to Israel, praised Clinton’s choice, saying in a statement that Kaine “has proven himself to be a great friend of Israel and a champion of pragmatic, proactive American foreign policy.”

“On Capitol Hill, Senator Kaine, as a member of the Senate Foreign Relations Committee, has consistently advocated the need for a two-state solution to the Israeli-Palestinian conflict as the only way to ensure that Israel can survive and flourish as a Jewish and democratic state and that Palestinians can live with independence and dignity,” the statement continued.

The organization also commended Kaine on his support of 2015’s nuclear deal with Iran, which Israel and Netanyahu fought passionately, warning that the deal would only embolden Iran to increase its aggressive military and nuclear activities with impunity.

The Republican Jewish Coalition (RJC) called Clinton’s selection of Kaine “[proof] she cannot be trusted to keep our country safe”, citing the same political moves which J Street had championed and adding that the fact that J Street had endorsed him was a major red flag.

“Whether it’s his vote for the Iran deal, which paves the way to a nuclear-armed Iran, or his proud support of the progressive anti-Israel J Street agenda which earned him their enthusiastic endorsement, Senator Kaine has shown how out of touch he is on the dangers facing our country,” said RJC’s executive director Matt Brooks in a press release.