5,000 Immigrants From US and France to Arrive in Israel This Summer

Home » 5,000 Immigrants From US and France to Arrive in Israel This Summer 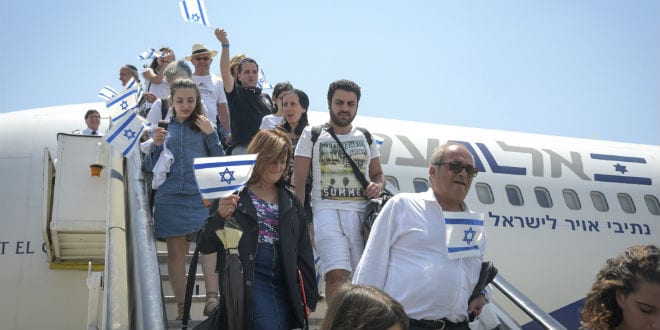 The 2016 summer aliyah season continued on Tuesday as an airplane carrying 218 new immigrants from the United States, including 103 children, landed at Ben Gurion Airport. Another 190 immigrants from France landed on Wednesday as a total of 5,000 immigrants are expected to arrive throughout July and August.

“It was very emotional,” said Miriam Blum, 19, who moved from New York City.  “There were all types of people from all types of backgrounds on the plane, many of whom are moving to the periphery, such as the Golan Heights or Ashkelon.”

The flight was organized by Nefesh B’Nefesh, a group dedicated to encouraging Aliyah from English speaking countries, which says that it has helped 50,000 Jews move to Israel since its founding in 2001.

Blum brushed off concerns about the current security situation, noting that she lived in Gush Etzion at the height of this past year’s violence. “You can never live in fear,” she declared. “Security is really a problem all over the world. I think that there is a certain price for the privilege we have of living in Israel.”

Although aliyah has decreased by 20 percent since last year, there has been a steady upsurge of those choosing to make Israel their home.

“Aliyah increased by 50 percent from 2013 to 2015,” said Absorption Ministry Spokesman Elad Sonn. “They are coming from France, Belgium, Germany, Russia, and the United States.”

Aliyah has notably been on the rise from France, a change many attribute to the anti-Semitism and the attacks on Jews there. French aliyah has jumped from 1,900 olim (immigrants to Israel) in 2012 to 7,800 olim in 2015. French citizens make up 25 percent of all olim.

“French Jews who immigrate to Israel are coming by choice—they have a whole world of opportunities before them and they are choosing to come to Israel,” said Jewish Agency Chairman Natan Sharansky. “We must do everything we can to ease their professional, educational, and personal integration into Israeli society.”

The State of Israel places a high priority on aliyah and offers a variety of services for new olim, such as free college tuition and tax breaks. The government recently declared a new national holiday called “Aliyah Day” that is designed to celebrate those immigrating to Israel.