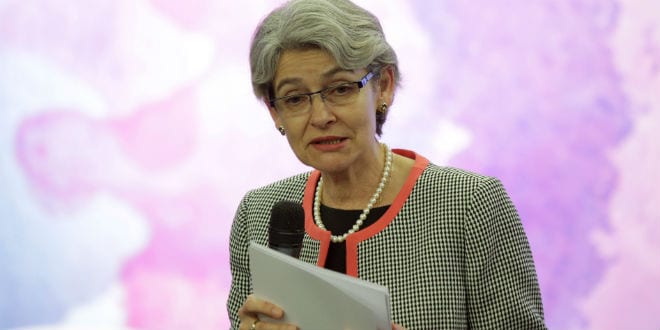 Amid the heated atmosphere surrounding the pending decision by UNESCO to solely recognize Muslim sovereignty over the Temple Mount, the general director of the organization, acknowledged on Friday the ancient connection between Jews and Christians to the city of Jerusalem.

“The heritage of Jerusalem is indivisible, and each of its communities have a right to the explicit recognition of their history and relationship with the city,” Irina Bokova affirmed in a statement. “To deny or conceal any of the Jewish, Christian or Muslim traditions undermines the integrity of the site.” Bokova is currently a candidate for the position of United Nations Secretary General.

The general director’s statements came just days after UNESCO agreed to postpone a vote on a highly controversial resolution that was jointly submitted by Jordan and the Palestinian Authority last week. The resolution seeks to prioritize Islamic ties to the Old City of Jerusalem while simultaneously erasing any Jewish historic connection to the holy site.

According to the news source Times of Israel, the original text of the resolution called for a return to the Temple Mount and Al-Aqsa Mosque to “the historic status quo” following the 1967 Six Day War, under which the Jordanian Waqf religious authority had the right to maintain all aspects “including maintenance, restoration, and regulating access” of the sites.

When Israel rejected the initial draft, the European Union submitted a revised edition, which Israel also subsequently turned down because it “still denies the connection of the Jewish people to the Temple Mount,” the Foreign Ministry statement said.

The committee had originally planned to vote on the resolution during this month’s meeting in Istanbul, but due to the recent attempted coup in Turkey, UNESCO agreed to reschedule. A new vote is expected to take place in October.

Though Israel has repeatedly blasted the measure, with Prime Minister Benjamin Netanyahu even offering the international body history lessons to understand the error of their intentions, the majority of the 21 nations currently on the committee routinely vote against the Jewish state, giving little confidence that the current resolution’s outcome will be in Israel’s favor.

UNESCO’s attempts to thoroughly deny any Jewish connection to Jerusalem are not altogether unexpected. Last April, the body’s executive board passed a resolution that explicitly ignored Jewish ties to the Western Wall and the Temple Mount – Judaism’s holiest sites. The resolution called Israel “the occupying power”, renamed the Western Wall to al-Buraq Plaza, and only referred to the Temple Mount by its Islamic name, the Al-Aqsa Mosque or Al-Haram Al Sharif.

In October, the Grand Mufti of Jerusalem, who was appointed by Palestinian President Mahmoud Abbas, claimed that a mosque stood on the Temple Mount “since the creation of the world”, and that it was never the site of a Jewish temple, despite all contradictory evidence.

This phenomenon, of either expressing doubt or outright denying that the Jewish temples once stood on the Temple Mount, has been described as “Temple denial” by Dr. Dore Gold, former Israeli ambassador to the UN and director general of the Israel Ministry of Foreign Affairs.

Infuriated by UNESCO’s decision, the Nascent Sanhedrin this week published a declaration denouncing the body’s plans and even strongly emphasized that the current wave of terror plaguing the globe is a direct result of the pending vote.