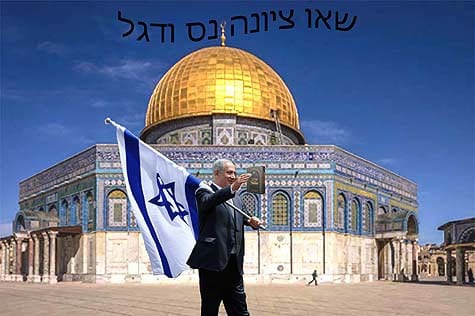 After Haim Brosh was arrested last week for posting on Facebook a photoshopped image of himself on the Temple Mount proudly waving an Israeli flag, supporters throughout Israel have flooded the social media channel with doctored photos of their own.

Brosh had arrived in Jerusalem last Tuesday intending to join the memorial ceremony for Hallel Ariel on the Temple Mount before he was handcuffed and removed by Israeli police. Justifiably confused, Brosh asked why he was being arrested. When he was told it was for the image of him holding the flag, a move which was seen as a possible means to destroy the peace, Brosh was absolutely shocked.

But after Brosh explained to the police that the image was the result of digital editing, which one glance at the photo could have revealed to even the most casual observer, they discharged him.

Brosh had originally posted the photo on his Facebook page three months ago on Israel’s Independence Day. He had been on the Israeli police’s radar ever since.

Despite his quick release, Brosh told Channel 2 News that he was thoroughly shocked at the police reaction.

“It was clear that the photo wasn’t taken on the Temple Mount. It is discouraging to see the Israeli police embarrass themselves this way. They operated in an aggressive and undemocratic manner to achieve goals that I really don’t understand.”

The police responded by saying that Brosh was, “known as a member of the Chozrim LaHar (Return to the Mountain) movement, and had been stopped for questioning due to behavior intended to disturb the peace.” Chozrim LaHar is a little-known movement that advocates allowing Jews equal rights to pray on the Temple Mount.

Brosh’s experience over his photo sparked inspiration for supporters throughout the country, leading others to follow suit. The Jewish Press encouraged readers to submit their own versions of themselves on the Temple Mount waving the flag. The online newspaper even provided a stock image of the Dome of the Rock for the background.

In the few days since being published, numerous entries have been submitted, some with pure patriotism, others with some humor, while others still were a little artsy.

People have photoshopped Israeli Prime Minister proudly waving a flag in front of the golden dome, Deputy Foreign Minister Tzipi Hotovely (who was once criticized by the Israeli press for saying it was her dream to see an Israeli flag waving on the Temple Mount), and many other characters, real and imagined.

A Facebook hashtag written as #מחאת_הדגל Mech’at HaDegel (Flag Protest) has turned this online joke into a movement.

The last time an Israeli flag flew on the Temple Mount was 1967, when the IDF conquered the site following the Six Day War. Judaism’s holiest site is now under the auspices of the Waqf, the Muslim authority, who jealously guard it, forcibly removing any non-Muslim who prays, pretends to pray, or displays any Israeli or Jewish symbols. Such was the case last August when a Christian tourist from France was beaten by a Muslim mob for waving an Israeli flag.