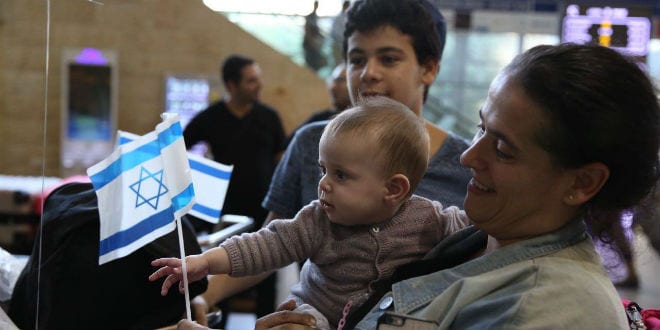 The International Fellowship of Christians and Jews (IFCJ) is bringing Biblical prophecy to life  by helping scattered Jews from all over the world make their home in Israel.

In late June, the IFCJ, chaired by Rabbi Yechiel Eckstein, sponsored two flights, bringing Jews to Israel from France and the Ukraine, a move proven more urgent now than ever as Jews abroad are facing anti-Semitism on a near daily basis.

The June 28 flight of 83 French Jews was the first IFCJ flight from France to Israel. The IFCJ is sponsoring a flight of 200 French Jews in August and they already have 2,000 more requests for the coming months.

When the French Jews arrived, Rabbi Eckstein led them in a moving ceremony at the Kotel, the Western Wall of the Temple Mount in Jerusalem. They began by reciting the “Shehechayanu” blessing, which is said upon joyous occasions.

Rabbi Eckstein stressed that the IFCJ approach to bringing Jews to Israel represents a necessary change in how aliyah has been handled.

“It’s not enough to bring them and say ‘goodbye’ at the airport, and ‘good luck’,” Rabbi Eckstein stated. “We stay [in touch] with them for a year or even more if necessary, to make sure they are able to succeed here.”

Rabbi Eckstein predicted that thousands of Jews would be coming to Israel from France in the near future, and believes his organization will play a major role in that.

“It’s our job to make their resettlement as good as possible so that even more olim (immigrants to Israel) will come,” the rabbi stated.

France currently has the largest Jewish population in Europe but that may soon change. In a recent survey, 51 percent of French Jews polled considered immigrating to another country and 43 percent considered making aliyah. More than 8,000 French Jews made aliyah in 2015, making France the largest country of origin for new immigrants for the second year in a row.

A second flight sponsored by the IFCJ, also at the end of June, from the Ukraine brought 200 Jews to Israel, saving them from what is becoming an increasingly difficult situation. Ukrainian Jews are the poorest in the world and the country is suffering from an ongoing civil war. The Ukraine has a long history of anti-Semitism and despite a newly elected Jewish president, anti-Semitic attacks are reported to be on the rise.

On their website, the organization proudly proclaims its mission to be “fulfilling Biblical prophecy” by bringing Jews to Israel on their “Wings of Eagles” aliyah program, named for a verse in Isaiah in which God promises to bring the Jews home.

But they that wait for Hashem shall renew their strength; they shall mount up with wings as eagles; they shall run, and not be weary; they shall walk, and not faint. Isaiah 40:31

The IFCJ has worked closely with the Jewish Federation in the past, giving them more than $170 million since 1994. In 2014, the IFCJ decided to sponsor its own aliyah programs. They have since had great success on their own, successfully bringing over 4,000 jews to Israel from 15 countries. Their goal is to bring another 2,000 Jews to Israel this year.

Founded in 1983 by Rabbi Yechiel Eckstein, the IFCJ was a vision ahead of its time. Rabbi Eckstein had to overcome centuries of difficult relations between Christianity and Judaism in order to make his vision real. Today, his efforts have helped bring the two religions closer through charitable works. The outpouring of love from the Christians towards the Jews is overwhelming as the IFCJ collects over $100 million dollars a year in donations from Christians, half of which are spent in Israel itself, supporting soup kitchens, absorption centers and bomb shelter renovations.

The IFCJ has proven that cooperation between Jews and Christians is not only possible, but may be the only way to save some Jews from the growing dangers that threaten communities around the world.