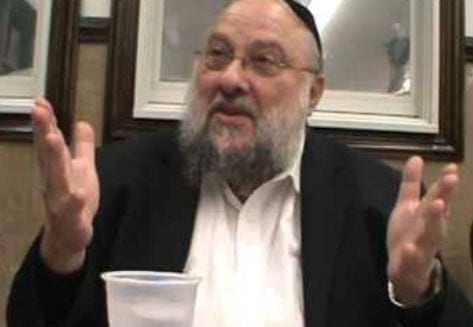 Rabbinic scholar Rabbi Mendel Kessin, best known for connecting current events to the End of Days, has come out with a new proclamation that the final war of Gog and Magog is on its way.

Rabbi Kessin has spoken with Breaking Israel News about the connection between blood moons and the Messiah and also about the Divine messages encoded in the Zika virus. Now, he is eager to spread his message about the upcoming war of redemption between Israel and Iran.

On July 9, Rabbi Kessin gave a lecture in Lakewood, New Jersey, devoted to the war of Gog and Magog. In the lecture, Rabbi Kessin enumerated the “many signs and indicators that the Moshiach (Messiah) is near.”

Among them, he included the founding of the State of Israel, the fact that today, Hebrew is “a living, resurrected language” that was dead for 2,000 years and the ingathering of the exiles as God promised Moses in Deuteronomy 30:1-5.

…then Hashem thy God will turn thy captivity, and have compassion upon thee, and will return and gather thee from all the peoples, whither Hashem thy God hath scattered thee. Deuteronomy 30:3

Although there are still Jews living outside of Israel, Rabbi Kessin emphasized that there are no nations in the world today that have the political will to stop Jews from moving to Israel if they want to do so.

Adding to the list of signs that connect current events to the imminence of the Messiah’s appearance, Rabbi Kessin mentioned the Internet. “A messianic figure can easily get on the Internet and communicate globally,” he said.

Other indicators that we are getting close include the fact that we recently completed the blood moon tetrad, that we are in the year after a shmittah year and that many believe that this is also a Jubilee year.

The most notable of the travails associated with the End of Days is the War of Gog and Magog. Described in Ezekiel chapter 38, Kessin explained that Gog and Magog exists when evil realizes its power is ending and tries to reassert itself by attempting to destroy the good that exists in the world.

Specifically, he taught that the War of Gog and Magog started with WWI, in which hundreds of Jewish communities in Europe were destroyed. The second stage of Gog and Magog was WWII when Hitler “was obsessed with the destruction of the Jews.That’s messianic.”

However, there was a critical element of Gog and Magog that was missing during these first two stages. That element is the presence of Moshiach ben Yosef (Messiah, son of Joseph).

While acknowledging that things can change, depending on the actions of the Jewish people, Rabbi Kessin said he believes that the third stage of Gog and Magog, the one that will finally reveal a messianic figure, is a war between Iran and Israel.

“[Iran swears] they’re going to kill the Jews with nuclear weapons. That is the final Gog [and] Magog war. In other words, I believe that Iran will be Gog from the Land of Magog.”

And what will Israel do during the war? According to Kessin, Israel will be killing Arabs in self-defense. He also predicted that Israel “will evict all the Israeli Arabs… and that’s going to drive the world crazy. And that clearly qualifies for the Gog and Magog war.”