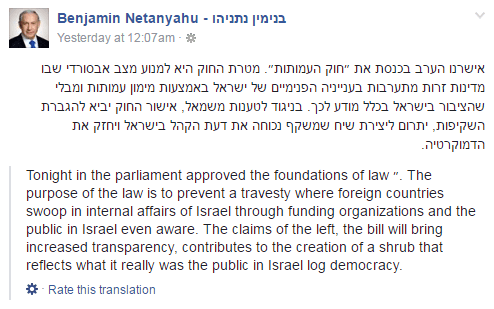 The Knesset plenum on Monday night passed the NGO Law, a.k.a. the Transparency Law, by a 57 to 48 majority. The new legislation’s official title is “Law on disclosure requirements for recipients of support from a foreign political entity.” It was the brain child of Justice Minister Ayelet Shaked (Habayit Hayehudi) and it requires NGOs that receive more than 50% of their budget from a foreign source to report this fact to the NGO registrar and to note it in a visible fashion in all their publications as well as their communications with public officials.

Prime Minister Benjamin Netanyahu commented Monday night on his Facebook page that “the purpose of the law is to prevent an absurd situation whereby foreign countries intervene in Israel’s internal affairs through their NGO funding while the Israeli public is unaware of it. Contrary to the arguments on the left, passing the law will increase transparency, contribute to creating a dialog that reflects accurately the views of the Israeli public and will bolster Democracy.”

The vote followed a boisterous, even rowdy six hour debate during which the opposition submitted no less than one thousand reservations, and opposition members expressed resolute objections to the bill. Meretz chair Zehava Galon accused the bill’s authors that their purpose “isn’t enhancing the transparency but [constitutes] political persecution. … the bill’s authors and promoters wish to shut the mouths of organizations that challenge government policy.”

MK Tzipi Livni (Zionist Camp) warned that the new law “defames our reputation in the world worse than any NGO could have done and destroys us from within.” Other ZC members were also of the opinion that the law is intended to quash opposition to the rightwing majority, at the expense of Israel’s reputation as a world democracy.

For comparison, the US Foreign Agents Registration Act (FARA), passed in 1938, requires that agents representing the interests of foreign powers in a “political or quasi-political capacity” disclose their relationship with the foreign government and information about related activities and finances. The purpose is to facilitate “evaluation by the government and the American people of the statements and activities of such persons.” In 2007 the Justice Department launched an online database which can be used by the public to search filings and current reports.

The US law requires periodic disclosure of all activities and finances by people and organizations that are under control of a foreign government, of organizations or of persons outside of the United States (“foreign principal”), if they act “at the order, request, or under the direction or control” of this principal (i.e. as “agents”) or of persons who are “controlled or subsidized in major part” by this principal. Organizations under such foreign control can include political agents, public relations counsel, publicity agents, information-service employees, political consultants, fundraisers or those who represent the foreign power before any agency or official of the United States government.

But the US law provides explicit exemptions for organizations engaged in “religious, scholastic, academic, or scientific pursuits or of the fine arts,” as well as for those “not serving predominantly a foreign interest.”

Constitution, Law and Justice Committee Chairman MK Nissan Slomiansky (Habayit Hayehudi) told the House that “anyone wishing to influence the agenda of the Israeli public must be transparent. It is inconceivable that foreign states would hide behind associations and organizations acting on behalf of interests that are not in line with those of the State of Israel. Now everything is on the table, everything is revealed, and they will undergo the public’s scrutiny.”

Slomiansky proceeded to read from a list of just how much money some leftwing NGO received from abroad—some of whom get 100% of their budget this way—and the opposition benches went on the warpath, drowning his voice with their angry shouting.

The final version of the law omits the requirement that representatives of NGOs with more than 50% foreign funding be obligated to wear a tag identifying them as such, mostly because of the associative comparison with the yellow tag Jews were forced to wear under Nazi occupation. They will also not be obligated to announce this fact in committee hearings, only check it off when they sign up to speak. However, during a hearing, should a participating MK require this information of them they must disclose it or risk not being allowed to testify.

The law, which goes into effect January 2017, imposes a fine not greater than $7,500 on violators, but will not be applied retroactively. It gives the left about six months to come up with new, creative ways of getting their funding from abroad in an indirect way.