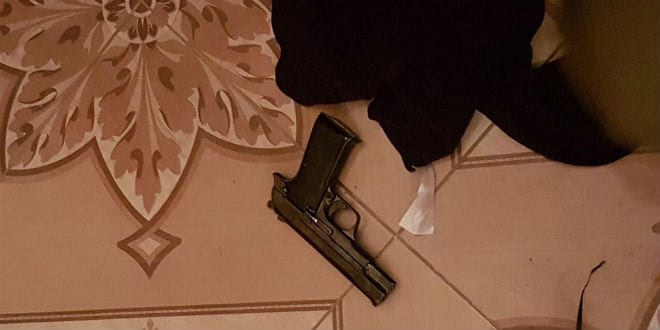 A Shin Bet (Israel Security Agency) spokesperson announced on Monday that a large cache of recently-produced firearms as well as four lathes used to make the weapons were seized in a joint operation with IDF special forces and Samaria District Police.

“We confiscated a variety of homemade automatic rifles including Carl Gustavs and improvised M-16s and Uzis,” the spokesperson said.

Illegally-made firearms, especially the Carl Gustav, have been frequently used by Palestinian terrorists during the recent wave of terrorism, including at the deadly shooting attack in Tel Aviv in June.

The entrance to the factory itself was hidden under a fake floor panel that lead to the basement of the Najah Sharif Tzfadi family home in the Palestinian village of Urif in the Nablus governorate.

Additionally, four men—Assem Najah, 39, Ali Najah, 41, Saadi Najah, 46, and Assad Najah, 24—were arrested during the raid. According to the Shin Bet, Assem and Ali served in the Palestinian General Intelligence Agency.

“They mostly sold the firearms throughout other parts of Judea and Samaria. However, we estimate that the arms dealers used their connections to sell the guns inside Israel as well,” the Shin Bet spokesperson explained.

According to the Shin Bet, the raid was part of a larger and ongoing effort to “crack down on illegal arms manufacturers and traders in Judea and Samaria.”