UNESCO to Vote on Whether Temple Mount is Jewish or Not 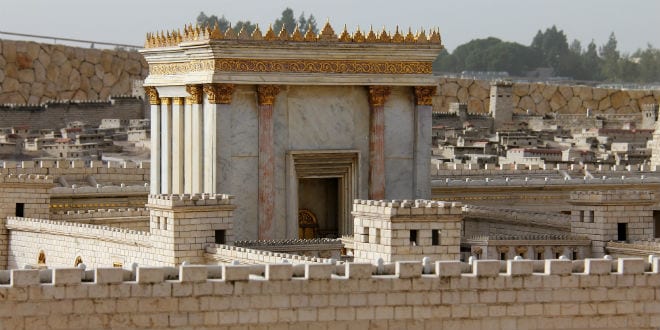 The United Nations is once more set to question the eternal connection of the Temple Mount and the Jewish religion with a vote on a resolution which would repudiate any link between the two.

The UN’s Educational, Scientific and Cultural Organization (UNESCO) will vote on the draft decision during its 40th annual meeting, which is being held in Istanbul, Turkey. It is the second such anti-Israel decision in months, following an April resolution in which UNESCO attempted to erase Israel’s ties to its ancient heritage sites, the Temple Mount and the Western Wall.

The Temple Mount is considered the holiest place in the Jewish religion. It is the site of two ancient Jewish Temples. The purchase of the site by King David and the building of the Temples are recorded in the Bible. However, today the Temple Mount is claimed by Arabs, whose work to delegitimize Jewish ties to the site has gained much ground on the international stage, as evidenced by the adoption of the April resolution.

The new UN draft, a joint Palestinian-Jordanian effort, calls for a return to the “historic status quo” which existed before the 1967 war. Presumably, this means completely banning Jews and other non-Muslims from the entire Temple Mount complex.

Today, while non-Muslims are allowed to visit the site during certain restricted hours and under careful monitoring, they are not permitted to pray. Arab claims that Israel is currently attempting to change the status quo following an increase in the number of Jewish visitors to the Temple Mount are behind the surge of terror attacks and violence which has plagued Israel for months and taken the lives of 40 Israelis and other victims.

The UN document repeatedly refers to Israel as the “occupying power” and accuses it of causing damage to the site, carrying out illegal excavations and preventing the Jordanian Waqf, which has jurisdiction over the Temple Mount, from making repairs and renovations.

According to the resolution, Israel is guilty of “intrusive constructions, tunneling and underground excavations” and “aggressions against religious sites and prayer places.”

In fact, the Waqf’s own “repairs” on the site are themselves illegal and risk causing serious damage to valuable ancient artifacts and structures. A recent attempt on the Waqf’s part to carry out illegal construction on the Temple Mount was met with an injunction from the Israeli government to immediately halt the project.

The draft refers to the Western Wall Plaza in quotes and, like its April predecessor, calls the holy site of Jewish worship “Al-Buraq Plaza”.

While the Temple Mount is home to the Dome of the Rock and the al-Aqsa Mosque, two important Islamic structures, the Western Wall has absolutely no Muslim connection whatsoever.

Israel’s Foreign Ministry is currently laboring to convince nations to vote down the motion, calling it “another malicious and dishonest attempt to harm Israel’s affinity with its capital.”

Carmel Shama Hacohen, Israel’s ambassador to UNESCO, also slammed the resolution, saying that the international condemnation following the April decision had clearly not been enough to stop the Palestinian agenda from moving forward in the UN.

“Anyone who thought that after the criticism voiced by Israeli and international Jewry against this decision and the recanting of the heads of state and foreign ministers around the world following the last decision that Palestinians would come to their senses, need to come to their senses and internalize this complicated reality,” he said.

“We have made a concerted diplomatic [effort] but the voting will be conducted by a secret ballot and the rules of the game are well known: Palestinians almost always have a majority.”

Hacohen was referring to an outpouring of protests following the April vote, with both Jewish and Christian leaders speaking out against the decision. Christian representative to the UN Laurie Cardoza-Moore said the UN’s repudiation of the Jewish connection to the Temple Mount was akin to Holocaust denial.

The motion was heavily condemned by Israel, with Prime Minister Benjamin Netanyahu calling it “absurd”.

“UNESCO ignores the unique historic connection of Judaism to the Temple Mount, where the two temples stood for a thousand years and to which every Jew in the world has prayed for thousands of years,” he said at the time.

France and Brazil, who had both voted in favor of the resolution, backtracked on their original decisions, saying they had made a mistake in helping to pass it.

The April resolution referred to the Western Wall as “Al-Buraq Plaza” and condemned “Israeli aggression on the Temple Mount”, which it called a “Muslim holy site of worship”.